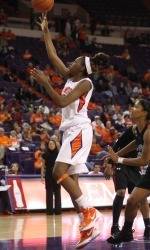 GREENVILLE, SC – The Clemson Lady Tigers, who trailed by as many as 11 points with less than 12 minutes to play, came back and held on down the stretch for a 68-67 win at against Furman (3-2) at Timmons Arena in Greenville. Three Clemson post players recorded double-figure rebounds, and the Lady Tigers (3-2) held Furman to .270 shooting from inside the arc in the win.

Pauldo (5-10 FG, 14 points, 11 rebounds) recorded her second career double-double, scoring 12 of her 14 in the second half, including seven in the final eight minutes. She played 22 minutes off the bench. Quinyotta Pettaway recorded career-bests of 16 points and 10 rebounds (8 offensive), and hit all four of her free throws in the contest.

Freshman Nikki Dixon hit double-figures for a fifth consecutive game with 11 points, including a crucial steal and two fast break hoops to give the Lady Tigers the lead for good with less than three minutes to play. Chancie Dunn was excellent as well, as the sophomore tallied nine points, seven assists, and six rebounds. Lindsey Mason was just a point shy of her second career double-double, as she tallied nine points and ten boards.

The Lady Tigers struggled from the line, hitting just 18-34 attempts, while the Paladins nailed 17 of their 22 freebies for a .773 mark. Clemson overcame a six-point halftime deficit in the game, and outrebounded the Paladins by a 52-43 margin, exploiting a decided size advantage.

In the first half, the Paladins held Clemson to a 9-34 mark from the field, despite The Lady Tigers’ 16 offensive rebounds, which they were only able to convert for six points. The Paladins, meanwhile were 7-15 from behind the arc and just 3-16 inside. Clemson was aggressive on the boards, and got to the line 21 times in the half, but could only convert on 11 of them, and went into intermission trailing, 35-29.

Pettaway had eight to lead Clemson, while Mason added six in the frame, to go along with two blocks.

In the second half, the Paladins stretched the lead to 11 with 11:38 to play, before the Tigers took off on their game-deciding run. A Pauldo hoop and foul with 5:54 left gave Clemson 59-56 lead for the first time since 4-3. Then, trailing 60-59, Dixon came up with a steal of Raegan Thompson near mid-court and took it down for the hoop, and was fouled with 3:51 to play. She then took down a long rebound and beat everyone down the floor for a layup to again stretch the lead to three. Pauldo then drained a 12-footer from the baseline following two Furman free throws to maintain the edge.

Clemson got a four-point lead with 20.1 seconds to play after Pettaway kept a shot alive for a rebound, and kicked it out to Dixon, who made one of two from the line. Thompson hit a three at the other end, to cut it to one with 7.7 to play, and the Paladins fouled Dixon, who missed both, and Furman grabbed the rebound with 5.2 seconds to play.

The Paladins inbounded to Kaitlyn Murphy, who was unable to get it over Clemson’s tough defense near half court, and her shot was deflected, sealing the win for the Tigers.

Clemson returns to action with the Big Ten/ ACC Challenge on Thursday at 7:00 pm against Illinois in Littlejohn Coliseum.