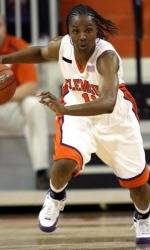 Trailing 52-50, Clemson head coach Cristy McKinney switched her defenses to fuel a 17-2 run midway through the second half. Kirstyn Wright scored seven points and Hardy added six of her 22, as the Lady Tigers (5-2) took advantage of their speed and a flustered Husky team to outscore Washington, 21-2, in transition for the game.

“We changed up the defense and were able to get a few stops that translated into run-outs,” McKinney said.

Hardy, a junior from Spartanburg, SC, totaled 44 points and 20 rebounds in the two games and was just one rebound shy of a double-double on Sunday.

“It was an honor to be named the MVP,” Hardy said, “but I’m just glad we played as a team to get this win.”

The Lady Tigers recorded 25 assists on 31 baskets as they shot 54.4-percent from the field. Bryelle Smith and Tasha Taylor each recorded six assists to lead the team.

Following the Lady Tiger run, Washington cut the lead to eight (67-59) with 4:37 remaining in the game. Hood then had a put-back and a field goal to end the Husky run and put Clemson back on top by 12.

Hood had just two points at halftime as Clemson posted 30 of its 51 second-half points in the paint. The sophomore post needed one rebound for a double-double and also had a pair of blocked shots against the Huskies. She averaged 12.0 points and 8.5 rebounds in the tournament.

After Sami Whitcomb drove for a basket to put Washington within 10 with 1:16 remaining, the Lady Tigers knocked down eight free throws to seal the victory.

Whitcomb finished with a team-high 18 for the Huskies (2-3) while all-tournament team honoree Michelle Augustavo was 3-for-9 from behind the arc to total 15 in the effort.

The Lady Tigers hit a trio of three-pointers in the first 4:36 of play to open up an early 10-point advantage over the Huskies. Washington recovered with a 14-2 run, including back-to-back threes by Augustavo, which put the host team on top at the 9:34 mark. After Hardy knocked down three foul shots, the teams traded points for the remainder of the half. Mollie Williams converted a pair of free throws with seven seconds on the clock to give the Huskies the 35-34 edge at the break.

The Lady Tigers will return to action on Thursday night as they play host to Northwestern in the ACC/Big Ten Challenge. Game time is scheduled for 7:00 pm from Littlejohn Coliseum.