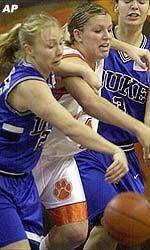 Clemson, S.C. — All season, Duke coach Gail Goestenkors has wanted her team to be more aggressive on the offensive boards.

She got her wish Thursday night. The No. 7 Blue Devils had 14 offensive rebounds compared with the Lady Tigers’ six on their way to an 81-58 win. Overall Duke outrebounded Clemson 48-24.

“Every time a shot went up, it was in my head to crash the boards,” said Iciss Tillis, who had 15 points and 10 rebounds. “We all did it.”

“We were really motivated,” she said.

But in between, the Lady Tigers managed just one basket and three free throws and watched a 7-0 lead turn into a 30-12 deficit.

“I am embarrassed for Clemson University for the effort of our basketball team tonight,” coach Jim Davis said.

“Doesn’t say much about the effort of our basketball team,” Davis said.

Duke’s halftime lead of 37-24 could have been larger, but the Blue Devils committed 12 turnovers and shot 16-of-35. However, the Blue Devils pulled down 11 offensive rebounds by halftime, matching Clemson’s total on both ends for the half.

“We were highly motivated,” Goestenkors said. “We’ve had trouble here in the past.”

Clemson, which ended the half hitting its last four shots, couldn’t carry the momentum into the final 20 minutes. The Lady Tigers missed their first six shots and fell behind 45-24 with 16 minutes to go.