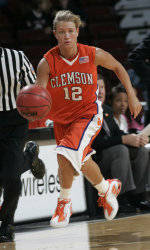 Clemson’s women’s basketball team begins ACC play on Sunday, as the Lady Tigers play host to the visiting Wolfpack of N.C. State at Littlejohn Coliseum. The game, scheduled to begin at 2:00 PM, features a 6-6 Clemson team against the 12-2 Wolfpack. The game will be carried by Clemson Tiger Sports Properties women’s basketball affiliates and can also be heard on XM Satellite Radio channel 181.

The Lady Tigers have won five of their last seven games after starting the year with a 1-4 record. Clemson was victorious last time out against Georgetown, as the Lady Tigers scored 48 second-half points to take a 71-62 game over the Hoyas last Sunday at home. The Lady Tigers trailed by four at halftime, meaning it was the first time all season Clemson gained victory after trailing at intermission.

Clemson holds a +4.4 rebounding advantage this season and has outrebounded nine of its 12 opponents. The Lady Tigers rank third in the ACC at free throw shooting (71.2 percent). Clemson’s defense has been strong this season as well, as opponents are shooting just 35.4 percent from the field and 28.8 percent from beyond the three-point line.

A pair of junior college transfers have performed well for the Lady Tigers this season. Reggie Maddox leads the Clemson team in points per game (10.4), assists (50), steals (23), and is second in rebounding (5.8 per game). She also is the squad’s top three-point shooter at 39 percent on the season. Tasha Phillips, a 5-9 native of Campbellsville, KY, averages 8.6 points per game and has reached double figures in half of Clemson’s games this season. She is second on the team with 19 three-pointers made.

D’Lesha Lloyd earned her first career start last Sunday against Georgetown and responded with career highs in both points (14) and rebounds (7). The 6-0 small forward from Columbia, SC is fifth on the team with an average of 6.9 points per game, despite playing just 13 minutes per game.

Julie Talley and Amanda White, both juniors, rank third and fourth on the team in scoring, respectively. Talley ranks seventh all-time in Clemson history with 78 three-pointers made, while White leads the team this season in rebounding at 6.7 per game.

N.C. State, winners in 11 of its last 12 games, will enter Sunday’s game with a 12-2 record (1-0 in the ACC). The Wolfpack downed Wake Forest 81-55 to begin conference play, then upset #12 Vanderbilt on Thursday. The win marked the first home loss for the Commodores against a non-conference opponent in 43 games. The Wolfpack shot 60 percent in the second half of that game.

Several players have contributed lately to N.C. State’s success. Rachel Stockdale was 4-8 from three-point range and had a game-high 16 points in the win over Vanderbilt. In the Wake Forest win, Billie McDowell hit six three-pointers and had 27 points. The leading scorer for N.C. State this season has been forward Tiffany Stansbury at 11.6 points per game.