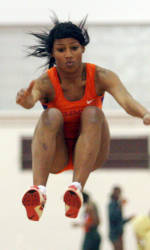 Thirty student-athletes from the Lady Tiger track & field team will make the trip to compete in this weekend’s events. Several are among the conference leaders in their respective events heading into the competition, led by sophomore Patricia Mamona in the horizontal jumps.

Sinkler will also be the team’s main threat to win the high jump, an event in which she ranks fourth in the ACC heading into this week’s meet. Sinkler has also qualified provisionally for NCAAs in the triple jump, and ranks fifth among ACC student-athletes in the long jump. She will be one of the league’s top freshmen on display Friday and Saturday.

Others expected to perform at a high level this weekend include Polly Hardy in the high hurdles, Caroline Kennedy in the pole vault, and Linda Buchholz and Liane Weber in the pentathlon. A sophomore from Germany, Weber earned ACC Freshman-of-the-Year honors last season after winning the pentathlon with a school record 4,089 points. Buchholz placed fourth in last year’s pentathlon, which will be held Thursday beginning at 1:30 PM.

Hardy ranks among the league leaders in the 60m hurdles, and is also third in school history with a personal best time of 8.39 last season. This year, her top time of 8.40 came just two weeks ago at the Tiger Invitational. Thus, she appears to be primed for a solid weekend in the event. The 60m hurdles prelims will be Friday at 2:15 PM.

Kennedy earned indoor All-ACC honors last season after placing third in the pole vault at Clemson’s indoor facility. This year, her top clearance of 12’5.5″ came at the Virginia Tech Elite Meet on February 9. The vault will be held Friday at 3:00 PM.

The Lady Tigers will take a young group of distance runners to Chapel Hill. Led by Ohio native Jenna Baker, four freshmen will compete in events ranging from 800 meters to 3000 meters in length. Baker has a top time of 9:55.43 in the 3000m. Her race will be held Saturday at 2:00 PM.

The final event of the competition will of course be the 4x400m relay team. The women’s races in that event are scheduled for 3:00 PM on Saturday afternoon. Clemson’s top 1600m relay time was 3:53.62 two weekends ago at the Tiger Invitational.