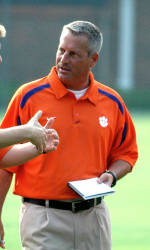 CLEMSON, SC – The Clemson women’s soccer team received its 14th straight bid to the NCAA Women’s Soccer Tournament as announced by the NCAA on Monday night. The team has been invited to the postseason tournament every year since the program’s inception in 1994. The Lady Tigers will travel to Knoxville, TN to face Charlotte in the first round on Friday, November 16.

“I am proud of this team for continuing the tradition of participating in the NCAA Tournament for 14 consecutive years now,” said Head Coach Todd Bramble. “I hope the rigors of our conference schedule this year and the experience we gained in the NCAA Tournament last year is something that we can put toward being successful in this year’s tournament,” he added.

Clemson fell to Charlotte during the 2007 regular season by a score of 3-1 at the Carolina’s Cup in Charlotte, NC. The University of Tennessee, ranked 15th nationally and one of the tournament’s four number-three seeds, will play host to Clemson and Charlotte in the first round. The winner of the Clemson vs. Charlotte game will play the winner of the Tennessee vs. Furman game in the second round on Sunday, November 18 in Knoxville.

Clemson is one of eight teams from the Atlantic Coast Conference, which led all conferences, to receive a bid to the field of 64. Six teams will represent the Southeastern Conference and five teams advanced from the Big 12, the Big Ten and the Big East.

The Lady Tigers have a 9-5-5 record on the season and are ranked 24th in the most recent RPI poll released following the games of November 5. Most recently, the team fell to eventual ACC Champion North Carolina in the quarterfinal round of the 2007 ACC Women’s Soccer Tournament at Disney’s Wide World of Sports Complex in Lake Buena Vista, FL.

Three players are tied for the team lead in scoring with 13 points apiece. Senior Nuria Zufia has six goals and one assist, freshman Samantha Fortier has five goals and three assists and sophomore Molly Franklin has two goals and nine assists on the season. Senior goalkeeper Ashley Phillips has 77 saves and has given up just 16 goals in 18 contests. Phillips was recently named to the All-ACC First Team, while senior defender Elizabeth Jobe and junior midfielder Julie Bolt were named to the league’s second team.

Clemson reached the NCAA Elite Eight in 2006. The Lady Tigers tied Vanderbilt, Oklahoma State and Stanford in the first three rounds and advanced in all three games by winning penalty kicks. Clemson made NCAA soccer history by becoming the first team ever to advance three consecutive games in the NCAA tournament by winning penalty kicks before falling to Florida State in the quarterfinals.