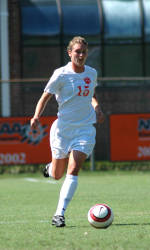 The Lady Tigers advanced to the NCAA Quarterfinals in 2006 for the fourth time in the program’s 13-year history. The team finished the season with an 11-8-5 overall record and a 5-3-2 ACC mark and ranked in a tie for 14th in the final NSCAA poll and was 15th in the final Soccer Buzz poll. The team returns nine of 11 starters and 17 letterwinners overall from the 2006 squad, including All-American goalkeeper Ashley Phillips and All-ACC selections Julie Bolt and Elizabeth Jobe.

The Lady Tigers will open the 2007 season with two exhibition games, at Davidson on Tuesday, August 21 at 6:00 p.m. and at home against Georgia on Saturday, August 25 at 7:00 p.m. Clemson’s first regular season game will be on Friday, August 31 against Liberty at 5:00 p.m. at Riggs Field.