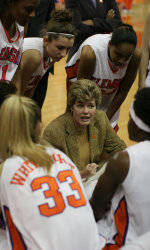 The 2006-07 Clemson women’s basketball team made great strides while building for a bright future under second-year Head Coach Cristy McKinney. The Lady Tigers won more games last season than in each of the previous two, while placing two players on the Atlantic Coast Conference All-Freshman team.

Lele Hardy completed one of the most successful rookie campaigns in program history, setting numerous Clemson freshman records, while junior Tasha Taylor responded superbly to a position change and moved up the career charts for both assists and steals.

Hardy recorded 98 steals for the year, the most for a Lady Tiger freshman and fourth-best in ACC freshman history behind an impressive group of league legends. Her 98 steals also rank her second all-time at Clemson, while Hardy set a school freshman single-game record when she tallied eight steals against Vanderbilt on Dec. 3.

The native of Spartanburg, SC was the second-leading vote receiver on the ACC All-Freshman team and was a two-time ACC Rookie-of-the-Week honoree. She averaged 11.6 points and 6.9 rebounds for the season, both of which ranked among the top 30 in the conference. Red-shirt freshman Christy Brown joined Hardy as an all-rookie selection, marking the first time in school history that two Lady Tigers have earned the honor in the same season. Brown started 29 of 30 games at the point guard position and led conference freshmen with a 4.66 assist per game average.

Meanwhile, junior Tasha Taylor found her shooting touch and classmate D’Lesha Lloyd broke onto the scene in the 2006-07 season. Taylor, who played the two-guard last year, increased her scoring average just over four points per game from the 2005-06 season to rank second on the team behind Lloyd with an 11.9 figure. The Columbus, GA native also nearly tripled her career three-point shooting statistics, draining 26 last season after hitting just nine in her first two years combined. She led the team with both a .470 overall shooting percentage and a .371 mark from behind the arc, significantly raising her career averages in both.

Lloyd then exploded with 24 double-figure scoring games, including a stretch of 16 straight, during 2006-07. She led the team with a 14.2 scoring average, doubling her career average from her freshman and sophomore seasons. She also bettered her prior career rebounding average by 3.0 per game to rank second on the team with a 6.5 figure.

Lone senior and sharpshooter Carrie Whitehurst concluded her Clemson career ranked among the top 10 in a trio of three-point shooting categories. She drained 81 threes during her tenure to rank eighth all-time, while averaging 0.74 three-pointers per game for ninth place in school history. Whitehurst’s 252 attempts from long range were also listed eighth in the Clemson annuals.

Whitehurst was just one weapon, though, as the Lady Tigers overall were a threat from three-point range for a second season under McKinney. The team set another top-five mark for three-point field goals made with 147 in 2006-07 after converting 154 in 2005-06. Their performance in the final regular season game against Virginia also made the Clemson annuals, as the team hit 9-of-14 three-pointers to tie for third-most for threes in a single game and rank fourth in school history with a .643 percentage.

The Lady Tigers, as a team, again played one of the more difficult schedules in the country, facing 12 teams that were ranked among the top 60 in the final RPI Ratings. Eleven of their opponents earned invitations to post-season play with nine participating in the NCAA Tournament.

Clemson doubled its ACC win total from the last two seasons and won its first ACC road game in nearly three years when it defeated Wake Forest, 73-57, in Winston-Salem, NC to open league play. The Lady Tigers ended the season with a 4-10 conference record and a 12-18 overall ledger.