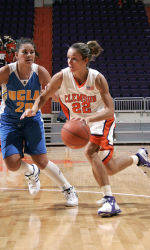 The Bruins (4-2) used a 13-2 midway through the second half to pull away from the Lady Tigers (2-6), who had won two in a row under first-year coach Cristy McKinney.

UCLA led by as many as 18 in the second half, but the Tigers cut it to 11 on Maxienne White’s steal and layup with 5:10 remaining. They kept chipping away at the lead, and Julie Talley’s 3 with 4:12 to go left the game still in doubt.

But Quinn and Willis were just too strong for the Lady Tigers. Willis’ steal and layup with just over a minute remaining sealed UCLA’s fourth straight win.

Clemson opened the half on a 9-2 run, but Lindsey’s Pluimer’s 3-point play cut the lead to 42-41. The Bruins fought back, going on a 13-2 run to move ahead 54-44 with 10:30 to go. The run was highlighted by Willis’ nifty pass to Pluimer underneath the basket for an easy score and Quinn’s basket from long range.

Adrianne Bradshaw’s basket ended a scoreless drought that lasted about 4 minutes for the Tigers.

Tasha Phillips, who was averaging 20 points a game over the past two contests for Clemson, finished with 18 points. Talley added 12.

Clemson hung with the Bruins for the first half. Led by Phillips’ 10 points, the Tigers shot 13-of-32. Three other Lady Tigers combined for six points apiece to keep Clemson in it.

UCLA struggled from behind the arc in the opening period, going just 1-for-8. But Quinn’s 11 points, on 5-of-10 shooting, gave the Bruins the lead 36-33 at halftime.

Willis, averaging 21.3 points a game, was held to just four points on 1-of-6 shooting in the opening period.

It was just the third meeting between the teams, with UCLA leading the series 2-1.