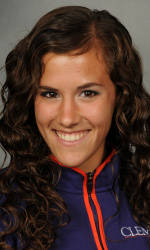 The competition season for a cross country and track runner is perhaps the longest of any varsity sport in the entire realm of intercollegiate athletics. Alyssa Kulik knows that all too well.

Her 2011 outdoor track season did not come to a complete finish until June 24 at the USA Championships in Eugene, OR. Instead of staying home in nearby Simpsonville and relaxing for the summer, she immediately went back to work as part of a study abroad program.

“I was in Salamanca, Spain for six weeks for my second study abroad program,” said Kulik, a modern languages major at Clemson. “It’s basically a college town. I could walk anywhere, so it had a nice feel. There was a nice running path along the (Tormes) river, and it went out into the countryside, so it was perfect.”

Kulik was not perfect on the track in 2011, but she was pretty close. She elevated her performance to levels never before seen in a Clemson women’s uniform. Kulik became the first female to compete at the NCAA Championships, earn All-America honors, and earn All-ACC honors in the 3000-meter steeplechase. She also won the event at the prestigious Penn Relays.

Her ascension as one of the top distance runners in all of collegiate cross country and track & field can be traced to several factors. Chief among them was roommate Kim Ruck’s startling success during the 2009-10 season.

“Seeing what she (Kim) had made me want to be at that level,” Kulik said of Ruck, a 2010 indoor ACC champion and All-American in the 5K. “I started running with Kim a lot more, and then I started believing I could do it. We both have different strengths and weaknesses, so we work well together.”

Another factor that has played a major role in Kulik’s development over the past two years was the addition of Brad Herbster to Clemson’s coaching staff in 2009.

“He set higher goals for us than we had in the past,” Kulik said. “Sometimes, you think the goals are ridiculous. You think to yourself, `There’s no way.’ But then, you reach them and he’s right. He puts a lot of faith in us and helps us get there.”

Kulik talks openly about her goals for the 2011 cross country season. She feels she works hard enough and believes her name will be mentioned with the upper echelon within the Atlantic Coast Conference and Southeast Region.

It is hard for Herbster to temper his enthusiasm for the upcoming cross country slate, because he knows his team is in good hands with senior leadership that the likes of Kulik and Ruck will provide.

“Alyssa is much further along now than she was two years ago,” Herbster said. “When you look at her talent, the sky is the limit. She has good speed and great form.”

Kulik’s talent and determination took her to new heights as a student-athlete last spring. Just two weeks after returning from Spain, she opens cross country practice on a mission to lead the Clemson program to even greater heights.

“I want to make my mark in cross country this year,” said Kulik, who is slated to graduate next May. “I want to improve my standing within the ACC and the region. Hopefully, we can make it to (NCAA) nationals as a team.”

Making it to the NCAA Cross Country Championships would extend her fall season by about 10 days, but don’t expect Alyssa Kulik to complain.