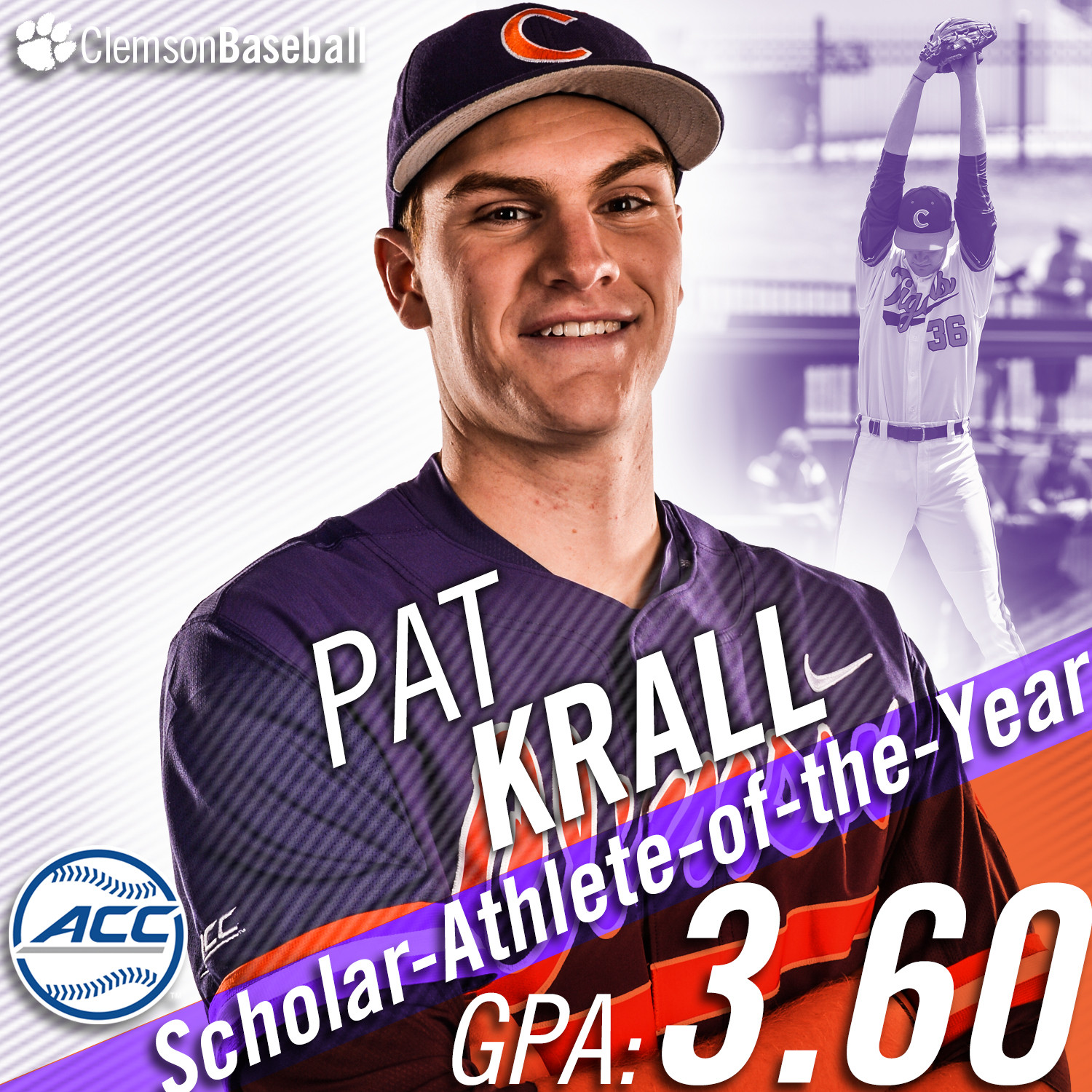 CLEMSON, S.C. – Junior lefthander Pat Krall (Downingtown, Pa.) was named ACC Baseball Scholar-Athlete-of-the-Year, announced Friday by the league office. The ACC Scholar-Athlete-of-the-Year awards were established in 2007 to be awarded annually to the top junior or senior student-athlete in their respective sports. Krall, a management major who has a 3.60 cumulative GPA, became the first Tiger to receive the honor for baseball.

Minimum academic requirements for selection to the All-ACC Academic Team are a 3.0 GPA for the previous semester and a 3.0 cumulative GPA during one’s academic career for undergraduate students. Athletic achievements during the most recent season are also considered in selecting the squad.

Beer (Suwanee, Ga.) was the winner of the Dick Howser Trophy as national player-of-the-year, the first freshman in history to win the award. He batted .369 with 57 runs, 13 doubles, an ACC-high 18 homers, 70 RBIs, a .700 slugging percentage, 62 walks, 15 hit-by-pitches, a .535 on-base percentage and one steal in 62 games. He ended the season on a 60-game on-base streak and had a 26-game hitting streak earlier in the season.

Eubanks (Moore, S.C.) was 6-5 with a 4.09 ERA and 70 strikeouts against 21 walks in 81.1 innings pitched. In his first career start against No. 18 South Carolina on March 6, he allowed six hits and one run with eight strikeouts to earn the win and ACC Pitcher-of-the-Week honors.

Pinder (Poquoson, Va.) rebounded from injury in 2015 to become Clemson’s starter in center and leadoff batter in 2016. He hit .294 with 11 homers, eight doubles, two triples, 46 RBIs, 67 runs, a .412 on-base percentage and nine steals in 64 games. Pinder, who was second in the ACC in runs, received the Bob Bradley Award as Clemson’s MVP of the South Carolina series.