CLEMSON, S.C. – Clemson Volleyball’s Kaylin Korte and Mckenna Slavik have swept ACC weekly honors for the Tigers, the conference office announced Monday. Korte was tabbed the league’s Player of the Week, while Slavik was named the ACC Freshman of the Week. Both players led Clemson to a 2-0 weekend and its third straight victory as the Illinois natives had career bests in the Tigers’ five-set comeback win over Duke on Friday (Oct. 18) and steered the Clemson effort in its sweep over Wake Forest on Sunday (Oct. 20). Monday’s announcement marks the sixth time in program history in which Clemson has swept ACC weekly honors, and first since 2011.

Korte tallied a career-high 30 kills and hit .418 in Clemson’s first win over Duke since 2012. The redshirt junior’s 30 kills against the Blue Devils are tied for eighth all-time in Clemson history and the most by a Tiger since Brittany Ross tied the program’s all-time single match record of 32 kills in 2005. Korte’s 30 kills are also the most by an ACC player in a single match this season and the most by an ACC player since Syracuse’s Polina Shemanova did so against Florida State on Oct. 14, 2018. The Morris, Illinois native pummeled nine kills in Clemson’s first set win (25-15), followed by seven in the fourth set, which Clemson won in extra points, 32-30. Korte rang up two clutch kills in game No. 4 when the Blue Devils had match point on two occasions (25-24, 26-25). In Clemson’s first ACC sweep of the season over Wake Forest, she posted a match-high 13 kills and hit .455 along with seven digs. 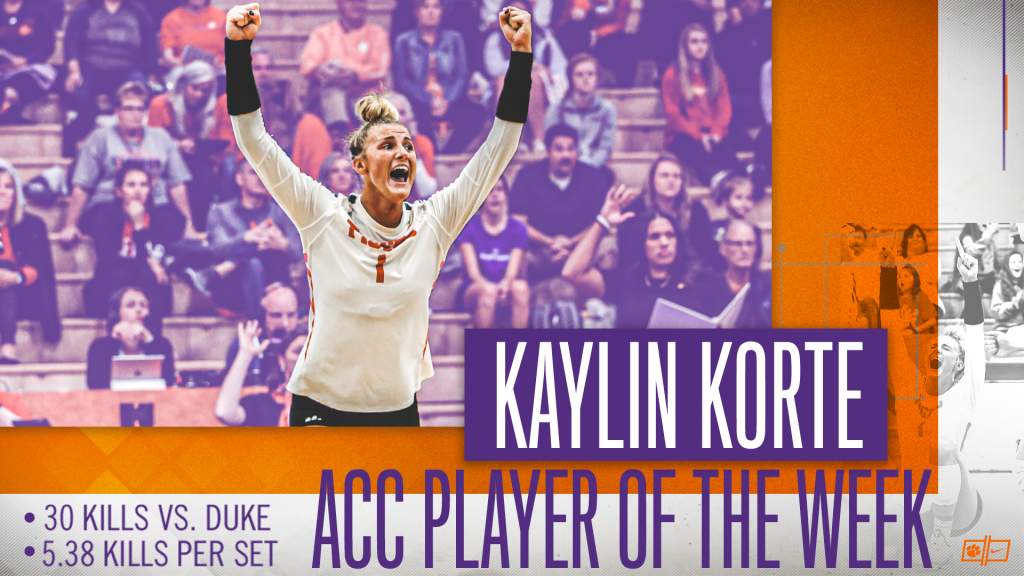 Slavik led the Tiger offense, which hit .310 on the weekend. The freshman averaged 10.36 assists per set in the Tigers’ pair of victories. Slavik was brilliant against the Blue Devils as she poured in a career-best 50 assists, 11 digs and seven block assists to ring up her fifth double-double of the season. The Saint Charles, Illinois native also secured the match-winning kill on a dump attack to give Clemson the fifth-set win, 15-4, over Duke. In Clemson’s sweep over the Demon Deacons, she dished out 33 assists, including 15 in the third and final set, one service ace and five digs. 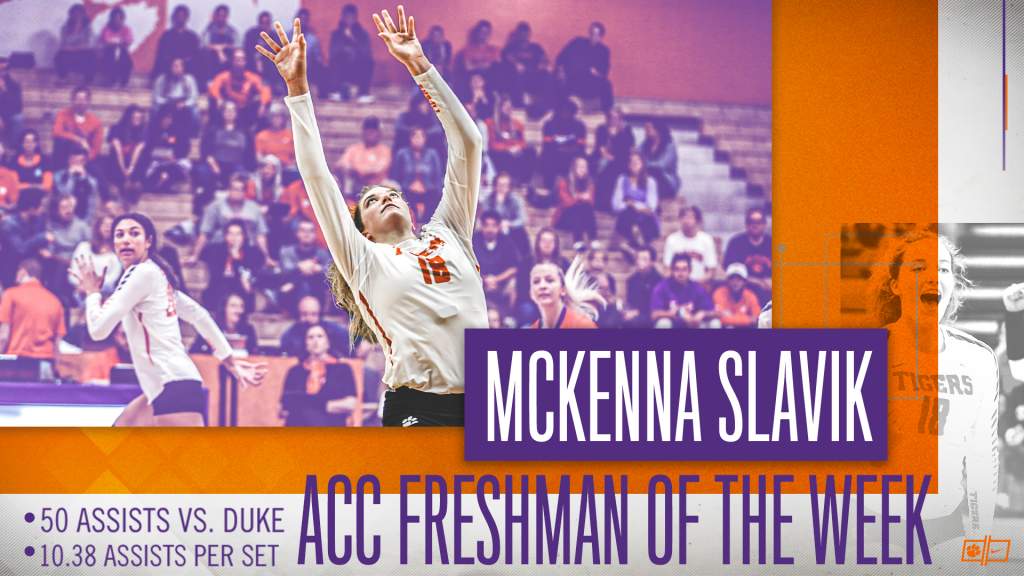 Clemson (9-10, 3-5 ACC) returns to Jervey Gym on Friday, Oct. 25 to host Miami at 7 p.m. Friday’s matchup against the Hurricanes is set to stream on ACCNX. For the Tigers’ complete 2019 schedule, click here.