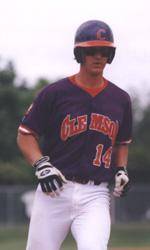 Senior shortstop Khalil Greene was named National Midseason Player-of-the-Year by Baseball America Thursday. Greene is hitting .452 with 10 homers, 43 RBIs, and an outstanding .963 fielding percentage. He has played in every game (232) since becoming a Tiger in 1999 and has started 229 in a row.

The Key West, FL native is on pace to break several Tiger career records, including doubles, hits, total bases, and games to go along with the RBI record he set earlier in 2002. Greene strained cartilage in his ribs at Georgia on April 9, but returned to the lineup a day later against Georgia in a designated-hitter role. His status for playing in the field against North Carolina this weekend is uncertain.

Head Coach Steve Reba was one of four senior starting pitchers cited as well. Johnson is hitting .398 with 13 homers and 38 RBIs in 31 games. Reba is 8-0 with a 3.25 ERA this year and has won 12 straight decisions dating back to last year. He also sports a 28-7 career record.