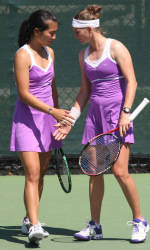 INDIANAPOLIS – Clemson senior Keri Wong was selected to the NCAA Singles Championships as announced on Wednesday. Wong, ranked 43rd in the nation, was a 2012 All-ACC selection, compiling a 24-10 singles record and a 9-2 record in ACC play. She and Josipa Bek have also earned a bid in the Doubles Championships.

Last season, the duo reached the finals of the NCAA Tournament doubles portion in Stanford, CA, and ascended to the nation’s No. 1 position. Currently, the duo sits at 12th in the nation. They rank as the two winningest doubles players in school history, and hold a 54-19 all-time mark together.