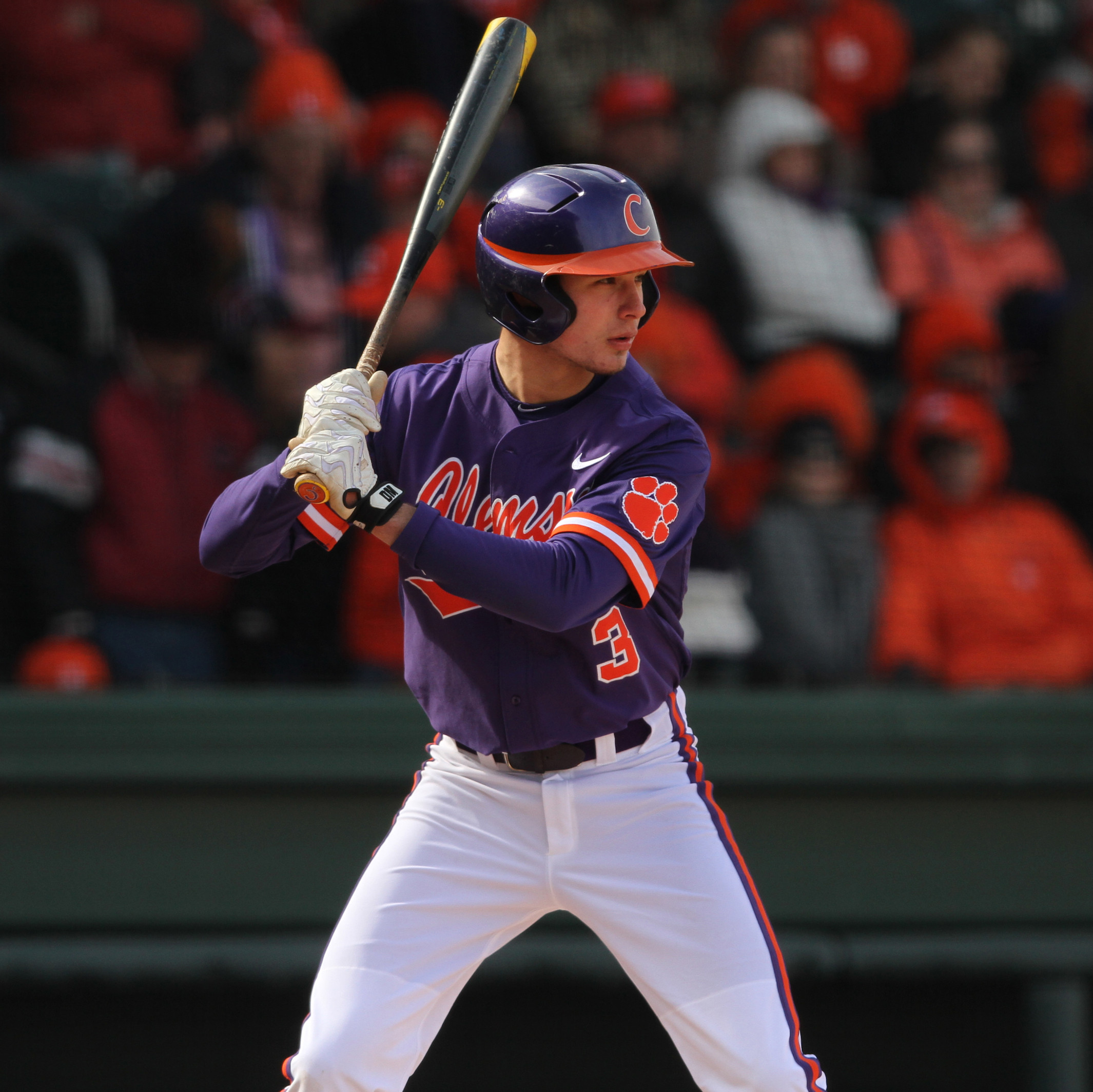 It’s been a busy junior season for Clemson infielder Tyler Krieger, and it isn’t even over yet.

Krieger has been among the Tigers’ leaders in batting average, walks and hits the entire season — all despite working his way back from a major shoulder injury sustained last season, undergoing a position change to second base and being asked to carry a larger leadership role on this year’s team.

In addition to all that, he was named preseason All-ACC this year by Perfect Game and was rated the No. 46 overall college prospect, the No. 40 junior in the nation and the No. 11 ACC prospect for the 2015 Major League Baseball draft by Perfect Game. In other words, quite a list.

“I remember spending nearly every afternoon during the summers watching the Braves, and Chipper,” Krieger said. “During the game, I had a wooden bat I’d hold, and my dad would toss nerf balls to me in the living room. When Andruw Jones came to the plate, I’d hit right-handed. When Chipper came to plate, I’d hit from whichever direction he did. I remember seeing him hit a home run from both sides of the plate in one game, I knew I wanted to be able to do that.”

And so he did. Coming up through little league and into high school play at Northview High School, Krieger’s game grew. That growth culminated into a professional opportunity at the end of his high school career. The Seattle Mariners drafted him in the 35th round, but he elected to honor his commitment to Clemson.

After having his pick of many schools in the SEC and ACC, Krieger settled on Tigertown. He wanted to stay close to home, but he also wanted to come to a place that felt comfortable.

“From my very first meeting and visit with Coach (Jack) Leggett and the rest of the staff, I knew Clemson would be a great fit,” Krieger said. “I was hooked, and I’ve loved every minute of being here and playing with these guys and this coaching staff.”

He came to campus as a freshman and started every game of the season for the Tigers, totaling 28 runs scored and 27 RBIs, with a .958 fielding percentage at shortstop. Quickly, he became one of Clemson’s leaders, on and off the field.

“As a younger guy, I remember thinking I wanted to lead by example,” Krieger said. “You want some of the older guys to notice you, the guys who you look up to and want to impress. I remember working my butt off every day to always get better and be the best I could be.”

Krieger started his sophomore year as one of the most promising young players in the nation. He was named to the Brooks Wallace Shortstop of the Year Award watch list and hit .338 with 49 runs scored. With everything seemingly headed in such a positive direction, he hit a major roadblock on April 22, 2014. A shoulder injury would end his streak of 101 consecutive starts to start his Clemson career, and the rest of his 2014 season.

The road back has been long, Krieger will be the first to tell you that. Progress has been made, obvious when you consider the 2015 season he’s having, but progress is not without setbacks.

“With every week and every month, there’s progress,” he says. “But those aren’t the hard parts. The hardest thing sometimes, is realizing there’s going to be peaks and valleys with rehab and going through all this. It’s helped me understand the ins and outs of the game better, to be honest. I’ve had to learn things I never thought I’d consider.

He worked his way all the way back and started the 2015 season as Clemson’s designated hitter, predominantly hitting third in the lineup. The determination and drive required to rehab and get all the way to playing by the time the season started earned him a spot as a 2015 team co-captain, selected by the coaches and his teammates.

“Now, I have an opportunity to be a bit more vocal,” Krieger said. “I can speak up now and lead not only by example, but also by saying things when I see something I don’t like. It’s a great opportunity, one that I really am honored to have.”

With the 2015 season winding down, Krieger takes the type of approach one would expect out of a captain.

“We’re trying to look at the smaller picture, take it one game at a time,” he said. “If we take care of our smaller goals, then our bigger goals will be taken care of as well. I love these guys, and I’m really excited to see what we can do.”