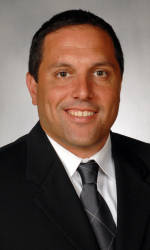 Clemson, SC – Josh Postorino has been promoted to an assistant coaching position with the Clemson men’s basketball program, Head Coach Oliver Purnell announced Monday. Postorino, a former player and assistant coach under Purnell at Dayton, served as Clemson’s director of basketball operations in 2007-08.

“Josh has done an outstanding job for me in various capacities at the University of Dayton and also was outstanding at Clemson in his position as director of operations,” Purnell said. “I have every confidence Josh will help us continue to get better across the board in our program.”

Postorino was initially hired as an assistant when Purnell was named Clemson’s head coach in 2003, but left with Ron Jirsa to coach at Marshall University after just a short time with the Tiger program. Postorino returned to Clemson last June, where he was involved with the team’s travel arrangements, scheduling, recruiting organization, and hiring and supervising of the managerial staff.

“I’m really excited about getting back into an assistant coaching position,” Postorino said. “I want to thank Coach Purnell for giving me the opportunity to continue to be a part of his outstanding staff. We certainly feel like this basketball program is on the rise, and it’s going to be exciting to see what the future holds here at Clemson.”

Postorino served as an assistant coach at Marshall from 2003-07 in Conference USA. He helped the Thundering Herd to a victory in 2006-07 over Virginia Tech, an eventual NCAA Tournament participant. He also was instrumental in helping Marshall to a 58-52 victory over a Sweet 16 West Virginia squad in 2005-06.

He spent the 2000-01 season as the director of operations at Dayton, before moving into a full-time assistant coaching position under Purnell for his final two years with the Flyers. In his three years as a full-time staff member, he helped Dayton to an overall record of 66-30 (.688 winning percentage) and three postseason appearances. He helped the Flyers to a 24-6 overall record in 2002-03 and #4 seed in the NCAA Tournament.

Postorino was the first player signed by Purnell at Dayton. He lettered all four seasons (1995-99), but his playing career was cut short due to medical complications. He played in 75 career games with the Flyers and graduated from Dayton with a marketing degree in 1999.

A 31-year old native of Clearwater, FL, he and his wife Jennifer have a two-month old son, Brody Christopher.