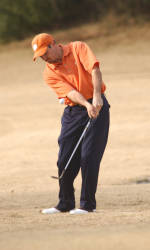 Clemson, SC – Clemson Assistant Golf Coach Jordan Byrd shot an even par 72 on Thursday at Cliff Springs Golf Club in Columbia, SC to qualify for the 2009 United States Mid-Amateur Championship. The national tournament will be held at the Cassique Course at the Kiawah Island Golf Club near Charleston, SC, October 3-8.

The US Mid-Amateur Champion is a competition between national amateur players who are at least 25 years of age. The champion typically receives an invitation to the Masters.

Byrd has qualified for the match play portion of the event each of the last two years. He reached the quarterfinals in 2007 in Oregon and reached the second round of match play last year at the tournament in Milwaukee, WI.

Byrd’s qualification was a bit unusual. He played in an early wave of players and finished with a 72, a score he felt would not be good enough to qualify for the national event. So he left the course and went to the home of his mother, Jo Byrd, in nearby Columbia, and mowed her lawn.

Near the conclusion of his chores, he received a call from someone at the course saying that the scores had not been as low as expected and that he might make a playoff.

Byrd put his golf shoes back on and returned to the course where he was involved in a playoff composed of seven golfers for two spots. With birdies on the second and third playoff holes, he earned the second and final spot.