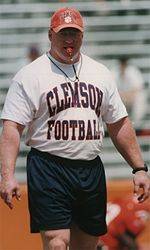 Joey, Where did you get the name Batman?Jim Gillespie Traveler’s Rest

It’s just a name I picked up from back in high school days I guess…just a combination of last name and some other crazy things I use to do when I was younger.

Coach Batson, What advantages or disadvantages does a periodization/Olympic lift based program have when compared to a program based on High Intensity Training “one set to failure” principles?Mark Naylor Joplin, MO

My background has been power lifting. I learned a lot about periodization. I learned a lot from Louis Simmons about what is known as percent training, what we call speed strength type training with max force work. I just prefer that type of training in terms of elevating their work capacity in terms of getting bigger and stronger, being able to handle more and more volumes. High intensity is kind of on the other end. It’s more of where my guys will train up to an hour and fifteen minutes at a good tempo, because as your talking about football its going to be based on the philosophy of the football team, the head coach, and what he wants of his team. High intensity is a little shorter work out, probably taking about a total of 15-18 sets per work out. As for the periodization style your probably talking as high as up to 40 sets per workout…With Olympic movements your trying to be able to speed strength, build power, and build an explosive athlete.

Joey, How have you seen the overall strength of the team increase in each of Tommy Bowden’s first three years? Is there a noticeable difference in the overall athleticism of the team?Rhett H. Powell Pickens, SC

Starting with the offensive lineman we averaged about 265 his first year. His starters right now are averaging about 290. We have gotten bigger up front, and of course all their numbers are better and stronger. Their average bench is around 400 now. 40 times are still pretty good…still pretty fast and quick up front, so we have improved our athleticism to quicker, faster, and definitely stronger. We have seen a big improvement in 40 times across the board. I think a lot of work we do is to train the total athlete, not just strength training in general. With our speed development program each position kind of trains differently. The conditioning is going to still be at a pretty high level. I think you got a stronger team, more athletic team, and recruiting has been good for us. The numbers we turn in to Coach Bowden at the end of the summer is pretty evident of what the players have done over the winter and summer.

Coach Batson, How is my nephew, Nick DePrimio, doing in the Weight room? I know that he is striving to improve each day and wanted to follow his progress.Patricia Bachisn Chesnee, SC

Nick’s done a great job. Nick right now is close to 300 pounds…he’s improved his strength tremendously since he has been here. I think the one thing about Nick is that he is very dedicated, extremely hard working, and very committed to the program. I think the biggest improvement that I’ve seen is that he is becoming more athletic, because we do work a lot with athleticism…not only on the strength part, but also the speed and conditioning…but Nick’s doing a great job and he is a good guy to have in the program.

Coach Batson, What is the most important body part or lift for a football player to train?Jonathan Gray Tampa, FL

Hi Joey, My question is this: my husband is a big Georgia fan and he is raving about the new strength coach they have there. He says it is a big help in recruiting to be able to say you have the best strength training staff. What will make or does make our staff at Clemson rank above staffs like they have at UGA and Fla. State. What do you do to ensure that we have the best staff and equipment at Clemson? Thanks and Go Tigers, from Sweden!Alison Howell Sweden

Well you know it all starts at the top, and I think Bobby and Coach Bowden have made a good choice in myself. I think I have proven myself through out the years now. As far as the department and the head strength coach it starts with me. I have hired three other young guys that are very energetic and great motivators. The thing that sets our program apart from any other program is that one we are at Clemson which says a lot for us…we take a lot pride in that. Also, unlike other staffs we are divided into four groups consisting of myself, John Sisk, Larry Greenlee, and Russell Patterson. I have the offensive line and tight ends…Coach Sisk takes the quarterbacks, receivers, and running backs…Coach Patterson takes the defensive line and linebackers…and Coach Greenlee takes the defensive backs, kickers, and punters. So these players are with the same strength coach year round, and each of those segments train differently in our speed program, conditioning, and weight training because each group has different needs. We are training guys to be better football players, so I think that is what sets us apart. What I here back from kids we recruit and their parents that get back in touch with us is that they are really impressed with how our staff handles the team and that we are not a just a corporate organization that just hands out work routines. We are basically personal trainers that get out on the floor and get after people in kind of a blue-collar mentality and train them hard.

Well as far as strength training exercises I think the squat, power clean, lunges, reps on the glut and hamstring machines, the austin leg drive machine, and core type exercise with the abdominal medicine balls and swiss balls are best for speed and acceleration. It’s really whatever you are trying to get accomplished. There is a lot you can do, we do it all and consult with some of the best people in the country to make sure that we are doing things to help our guys become bigger, faster, and stronger.

Joey, What is your opinion on the use of dietary supplements by college athletes?J Gray Tampa, FL

Number one, it starts with a good diet and that is where I believe a lot of programs around the country “miss the boat.” A healthy diet starts with nutrition, and there are people who are experts in that field who work extensively with athletes to assure that their diets are compatible with the energy they expend. From there I think players need to have adequate amounts of protein especially during their muscle building phases. You also need to have quality carbohydrates. For us we are real basic in what we use and that is the power station. The power station allows a player to replenish the proteins, carbohydrates, etc…that he is expending during his training. Outside of that I do not endorse products, but instead believe it all starts with a good sound nutritional program.

Coach Batson, Most people know that you were at Clemson in the late 80’s as a GA and at Furman before returning to Clemson. Other than the number of talented athletes, what is the biggest difference between being the Strength Coach at Furman and Clemson? Also, what is the biggest difference in strength training at Clemson now compared to when you were the GA in the 80’s? Thank you for the great job you and your staff do in training our athletes.Neil Paul Columbia, SC

At Furman, you have yourself and probably 1 assistant along with 2 or 3 students that you use to run basically the same number of athletes as you do here. When I was at Furman they did not have the new weight room, which they have today. Instead, I was down in the basement with about maybe 2000 square feet trying to run a division one program. Since then, they have gotten the new Timmons Arena. To sum it up, the biggest difference in strength training here at Clemson compared to Furman is the staff. Here at Clemson I have 3 fulltime guys, 3 graduate assistants, and a handful of students that assist in making the strength-training program here at Clemson one of the best in the nation.

Next week’s guest on “Ask The Tigers” will be true freshman quarterback, Charlie Whitehurst.