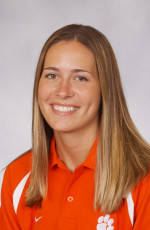 “Obviously I can’t express enough how excited we are to have Jodi back on staff and with our program,” Hoover said. “Jodi was a model student-athlete who contributed greatly to the team’s success while she was on the court. As a member of our staff, Jodi is very organized and a great support to me. She helped assemble our present team and I am really looking forward to working with her and Korrinn (Krog.”

Welp will resume the role she previously held, as Krog moved into the recruiting coordinator position at the conclusion of the 2007 season. She will be responsible for program operations, team travel, and directing the Tiger Volleyball Camp, as well as assisting with recruiting and game management.

“I feel very fortunate and honored to have the opportunity to return to Clemson,” said Welp. “I want to thank Coach Hoover and the administration. I am looking forward to being a part of a program that has meant so much to me, both as a player and coach.”

During her Tiger playing career, Welp was Clemson’s first four-time All-Region honoree and was a three-time All-ACC second-team member (1999-2001). She was named the 1998 ACC Rookie-of-the-Year and that same year was named to the ACC All-Freshman team. Throughout her career at Clemson, she was named to seven all-tournament teams. Welp ranks seventh on the career list for most attempts (3,600) and kills (1,422) and ninth in service aces (132). She is also third all-time for defensive saves with 1,309 digs and was named to the ACC’s 50th Anniversary team in 2003.

During her first stint as an assistant at Clemson, Welp helped the Tigers to a 20-win season in 2004 while helping Leslie Finn to become just the second player in program history to collect All-America honors. Finn holds the school records for kills in a career with 1,906 and career kills per game average at 4.19.

She was also involved in bringing to Clemson recently graduated seniors and fellow Illinois-natives Meghan Steiner and Leslie Mansfield. Steiner was named an Honorable Mention All-American in 2007 while Mansfield made her mark on the program as one of its greatest all-around players. Among current members of the Tiger squad, Welp helped recruit Jeannette Abbott, Didem Ege, Danielle Hepburn, Lia Proctor. Rising seniors Abbott and Hepburn are both two-time All-ACC honorees, while Murphy, who attended the same high school as Welp, and Ege earned the accolade in 2007. Proctor has also been a two-year starter on the outside and a vital part of the Clemson offense.

Welp, a native of Elwood, IL, graduated from Clemson in 2002 with a degree in elementary education. While completing her student teaching, Steffes served as the head coach of the Walhalla High School volleyball team. She coached the team to the regional playoffs in 2002.

She married Alex Welp, a former Director of Operations for the Clemson Men’s Basketball program, in the summer of 2006. The couple spent time in Virginia and Illinois before returning to the upstate and now resides in Easley, SC.