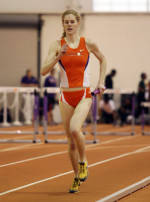 Greensboro, NC – Jenna Baker was named to the All-ACC Academic cross country team for the 2007 season, the league office announced Friday. The freshman from Bellevue, OH is the first all-academic selection for Clemson since the 2005 season when Jenny Barton earned the accolade.