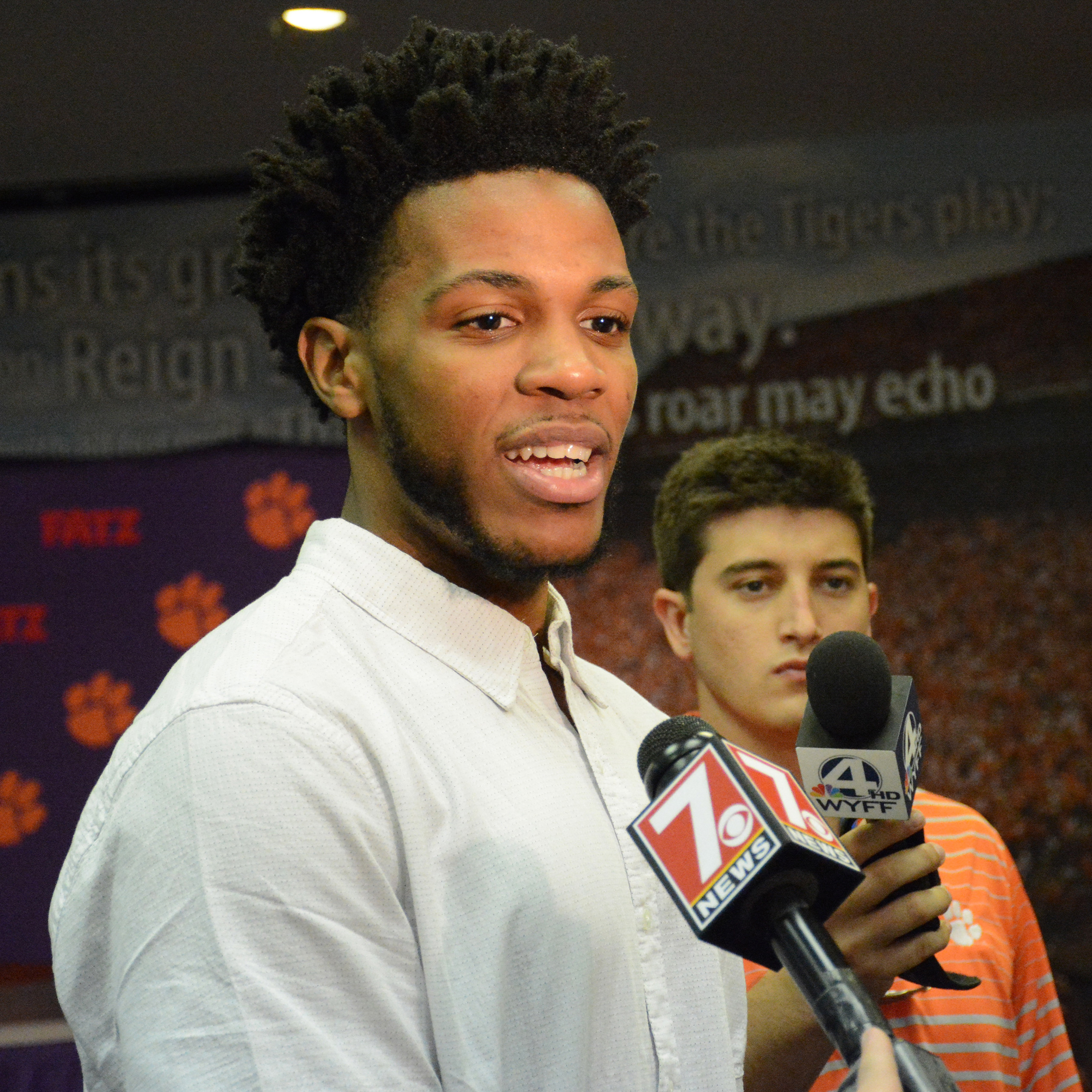 Note: The following was written on May 26, one day after Jaron Blossomgame announced he was returning to Clemson for his senior season.

Wednesday’s announcement of Jaron Blossomgame’s return for his senior season took me back a few years.

Seven, to be exact.

It was January 15, 2009, and star running back C.J. Spiller had gone down to the wire and wrestled with the life-changing decision of whether or not to forgo his final season and enter the NFL Draft.

A press conference was called that Thursday afternoon in the McFadden Building, at the time still the home of Tiger football. Prior to the announcement, an emotional Spiller broke down in head coach Dabo Swinney’s office as he agonized over the choice one final time. On one hand, he had made a commitment to Swinney (his recruiter) and to Clemson. And on the other hand, he was given a first-round grade by the NFL Draft Advisory Committee.

Spiller was joined on stage by sports information director Tim Bourret, who was moderating the press conference. To Tim’s surprise and to the delight of a throng of teammates packed inside the room, Spiller announced he would return to Clemson for his senior season. The room erupted in applause. Those of us privileged to be in attendance won’t soon forget that moment.

As things unfolded and JB took his NBA Draft decision down to the wire, I couldn’t help but think back to that moment. Coincidentally due to ongoing construction at Littlejohn Coliseum, we managed to evoke those great memories by requesting the same room and setup this week in McFadden.

And like Spiller in 2009, those of us close to the situation didn’t truly know what JB was going to do. It was obvious the decision was weighing heavily on him, and that it was truly 50-50 either way.

I kept in frequent contact with Jaron throughout the entire process. I was impressed, but not surprised, with the mature approach he took to everything. I didn’t bother him when he was initially left off the NBA Draft Combine list, because I knew he was probably hurt. But he sent me a text message shortly after he slid in as an alternate, a big moment for him.

As someone in charge of the program’s social media efforts, I asked him to keep me informed throughout the process so I could document his experience for the fanbase. The first full day he was in Chicago, he sent me a photo with his 5-on-5 coach, none other than Clemson Hall of Famer and current Houston Rockets assistant Greg Buckner.

Following an outstanding showing at the Combine, JB jumped on the radar for a lot of folks. He was listed nearly across the board as someone who improved his draft stock with his showing in Chicago, bringing top-40 status and even first-round potential into the fold.

Here locally, the vibe quickly turned to “He’s gone” after such an impressive showing. He was rising up draft boards and many assumed his departure was a mere formality. But I wasn’t so sure about that. I saw him after he returned from the Combine, and his body language belonged to that of someone who was extremely torn over this decision. He had four workouts remaining and just over a week to make the final call, but in my mind it was far from certain on either side of the fence.

On Monday, JB was in Phoenix for his final workout and we were within 48 hours of the deadline. I really needed to get some insight one way or another as to how we wanted to handle this announcement. We talked on the phone for about 15 minutes, and he was good with a formal press conference. I brought the idea to Coach Brownell the next morning, thinking it was a positive move whichever path he chose. The program was either going to be returning a great player, or would be sending another guy to the NBA. It was a win-win situation in my mind.

The media attention ratcheted up Tuesday. Reporters began calling and texting, trying to get me to answer the lingering questions. What’s JB going to do? Are you going to send out a release when he decides? What about a press conference? The planning had already begun on the back end, but I didn’t want to send out an advisory in case he changed his mind or Coach B wanted to handle it differently.

Early Wednesday, we made the decision to go ahead and announce the 2 p.m. press conference. At that point, no one knew of Jaron’s intentions. I had staffers asking me, because they knew I had been in touch with him. But of course, I ultimately had no idea.

I made sure the room was ready to go about 1:30, and then hung out in Coach B’s office until I was needed. He popped open his door, asked for Tim and I to come in to offer some “sage advice.”

I was past anxious at this point. I had compiled ‘Stay’ and ‘Go’ graphics and videos from colleagues, and wanted to know which ones I’d need to prepare. Luckily, Coach didn’t beat around the bush. “The good news is Jaron’s coming back,” he said, as he shut the door behind us. I breathed a sigh of relief, and then we discussed how the press conference would go. We came to the conclusion that JB would “wing” an opening statement, because he hadn’t prepared one.

We didn’t expect the room to be as full as it was. Teammates had come to support him. His coaches were all there. Athletic department staff. Even President Jim Clements and his chief of staff Max Allen, noted basketball enthusiasts, showed up to offer support. Jaron didn’t disappoint, as his announcement brought with it too a big cheer when he uttered the words “I’ll be returning for my senior year.”

As communications director for men’s basketball, his return made me happy for several reasons. First, it gives the Tigers a first-team All-ACC player returning, something we haven’t had in my 12 years working with the program. It’s going to be a heck of a lot of fun promoting JB and his teammates as they move into the new Littlejohn.

Second, this coaching staff deserved some good news. K.J. McDaniels blossomed right before our eyes into a first-team All-ACC player in 2014, but he opted for the NBA. That’s not something that’s easy to recover from at a place like Clemson.

But mostly, I was happy for Jaron because I’ve seen the road he’s taken to get to this point. He suffered a brutal compound fracture of his left leg in April just before he was set to enroll at Clemson. Within 14 months, he was prepping for a second surgery to expedite the healing process. At the time, I sent out a news release and quoted JB as saying: “Clemson fans, just stick with me. This isn’t something that’s going to hold me back.”

Clearly not, and Wednesday’s announcement was affirmation of that.

And just like Spiller, this popular Tiger deserves a similar sendoff as a senior.