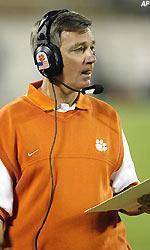 Jacksonville To Play Host To ACC Football Championship Game In 2005

GREENSBORO, N.C. – Atlantic Coast Conference Commissioner John Swofford announced today that Jacksonville, Fla., has been selected to host the ACC football title game in 2005 and 2006, with a two-year option for 2007 and 2008.

The unanimous decision was made in a Thursday morning conference call of the league’s 11 Faculty Representatives following a recommendation from the league’s Athletics Directors. The inaugural ACC championship football game will be played in ALLTEL Stadium on Saturday, December 3, 2005. Kickoff is scheduled for 1:00 p.m. and the game will be televised nationally by ABC.

John Swofford, ACC Commissioner: “We are extremely pleased to be able to bring the ACC football title game to Jacksonville. ALLTEL Stadium and the city of Jacksonville will provide our schools with not only an outstanding facility in which to play, but also an enthusiastic and progressive community that has always embraced college football. Our association with the city of Jacksonville and the Gator Bowl Association have always been very positive to all of the parties involved and we look forward to continuing to build on this relationship.”

Jacksonville Mayor John Peyton: “Jacksonville couldn’t be happier about hosting this game. We have always had a special spot in our hearts for college football, as any Gator Bowl or Florida-Georgia participant can tell you. We will give a warm welcome to the teams and fans, and we look forward to working with the ACC and the Gator Bowl Association to build another great football tradition here on the First Coast.”

Rick Catlett, Gator Bowl President: “We are extremely excited about the opportunity to extend the partnership between the Gator Bowl Association and the Atlantic Coast Conference. The awarding of this game is the result of a team effort between the State of Florida, the City of Jacksonville and the hundreds of volunteers that have pledged their support to help make this a truly spectacular event.”

Bob White, Chairman of the Gator Bowl ACC Football Championship Game Bid Committee: “On behalf of the Gator Bowl Association, its members and volunteers, we are extremely excited to be able to host the ACC Football Championship Games. To Commissioner Swofford, the ACC athletic administrations and the fans of this great Conference, we look forward to providing a first-class experience in Jacksonville.”