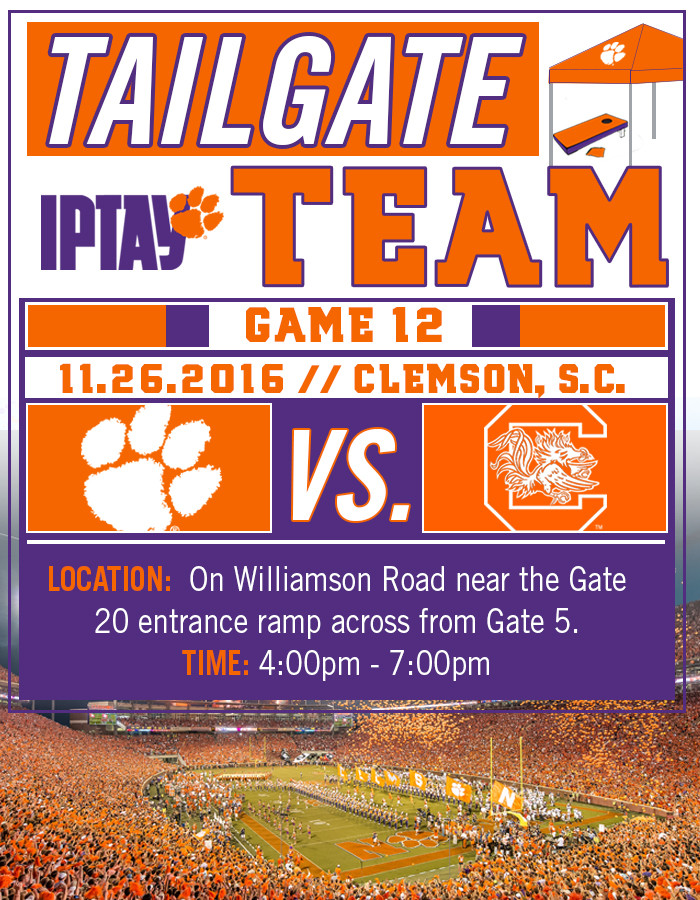 This Saturday, our 10-1 Tigers conclude the 2016 regular season against in-state rival South Carolina, under the lights in Death Valley! This week the IPTAY Tailgate Teams prepares for its final stop of the season and will be set up on Williamson Road near the Gate 20 entrance ramp across from Gate 5 of Memorial Stadium. The tailgate will run from 4:00pm until 7:00pm. The tailgate features a drawing for a premium gift, fall sports schedule cards, football posters, IPTAY information and plenty of giveaways.

This week, there will also be a social media component to the Tailgate Team. At an unannounced time this week, a tweet with a redeemable coupon will be released on the official IPTAY Twitter and Instagram handle @IPTAY_. Present the coupon via your mobile device to an IPTAY staff member on hand at the tailgate on Saturday and receive the announced prize, so be sure to stop by and see us!

The Tailgate Team, returning for its third season, is comprised of IPTAY staff members who set up at a new location on campus for each home Clemson football game. Our tailgate is full of IPTAY information and giveaways for all tigers! The goal of this initiative is to further market and grow the IPTAY brand to the Clemson Family and to answer any questions from both potential and current IPTAY members. This fall, the Tailgate Team will make seven stops across campus from Jervey Meadows to Bowman Field.