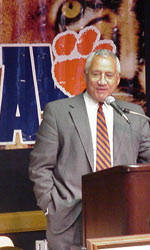 Clemson, SC – IPTAY raised over $20 million in pledges during the 2000-01 fiscal year according to data released by George Bennett, executive secretary of Clemson’s scholarship fund-raising organization. The figure was more than doubled the previous record set last year.

“We had a great year and much of the reason for it is the great feeling people have about Clemson under President Jim Barker and Athletic Director Bobby Robinson,” said Bennett. “Clemson people feel great about what has been going on at the University.”

“We have begun a lot of digging at our athletic facilities on campus and raising money for the Tiger Pride campaign will be our emphasis this year,” said Bennett. Construction has already begun on the new annex at Littlejohn Coliseum. Renovations to the South Side of Clemson Memorial Stadium will be ready by opening day. Further renovations to the West end of the stadium will begin after this football season.

Bennett said it will be difficult to top the fund-raising numbers established this year, but he and his staff are taking a positive approach. “We want to thank all the members for their pledges this year and especially the 750 IPTAY Representatives. They do a great job of selling our story around the country.”

Bennett also announced that season ticket sales for the 2001 Clemson football season had reached 57,365, just 260 short of the all-time record.