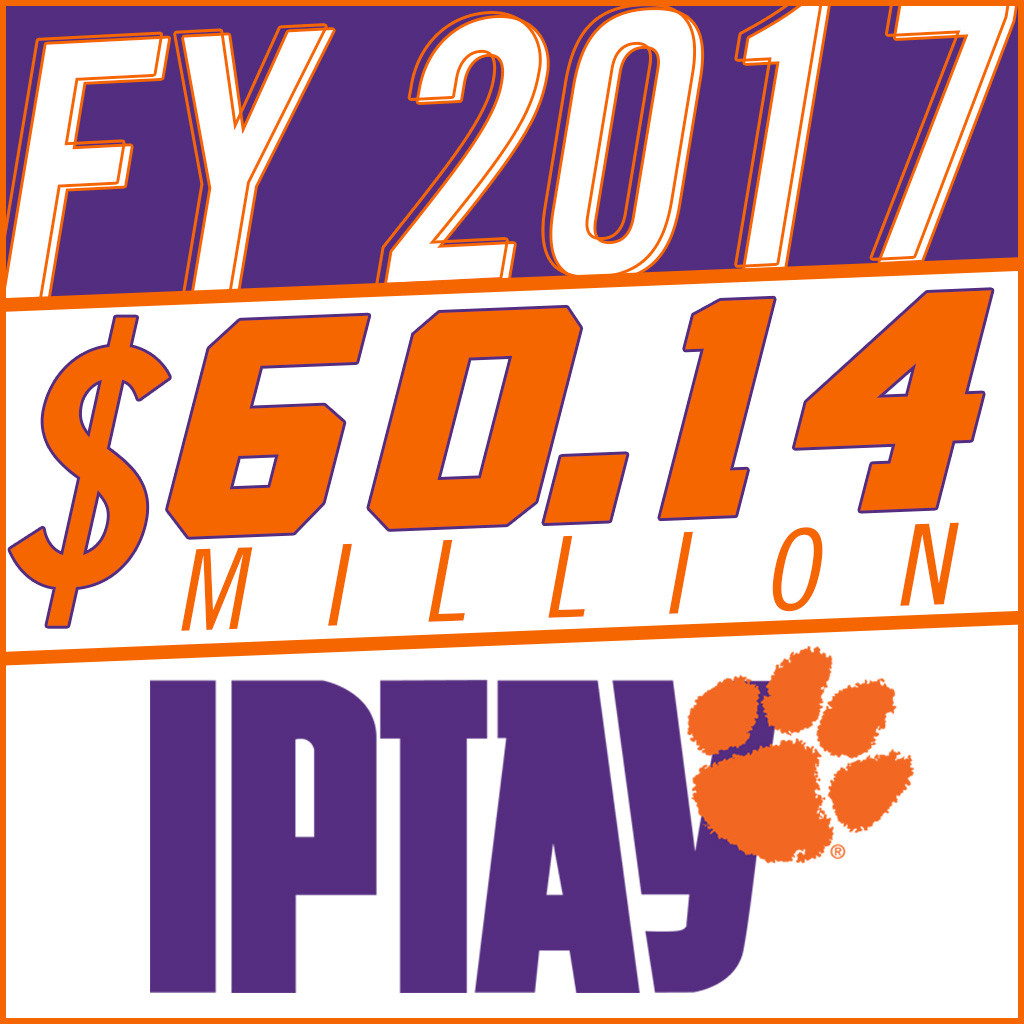 The “One-IPTAY” enterprise had a record breaking year during FY 2017 that ended on June 30, 2017. The organization that has supported the Clemson Tigers since 1934 reached a record total of contributions in 2016- 2017, totaling $60.14 million in cash and pledges. This total dollar number includes $34.3 million contributed to the annual fund, $16.59 million of major gift donations, $4.6 million in premium seating and $3.7 million of planned giving.

The IPTAY Annual Fund saw a record number of priority donors and dollars raised in 2017. Priority membership to IPTAY passed the 17,000 mark reaching 17,181 members, compared to 16,320 in 2016. Total contributions increased by over $5 million from the previous year reaching a record amount of $34.3 million raised in 2017.

Davis Babb, the CEO of IPTAY had this to say on the conclusion of the most recent year. “What an exciting time it is for our athletic program here at Clemson. Over 17,000 members of the Clemson Family made a commitment to the success of our student-athletes by being on our team in 2017. These generous gifts allow us to provide the best possible student-athlete experience by way of scholarship opportunities, facility improvements and academic support for the nearly 500 young people who compete in our athletic program. For that we want to say thank you.”

“IPTAY continues to be a difference maker for our program. As a leader in the world of athletic development, IPTAY and its’ donors’ significant contributions provide the resources necessary to support our student-athletes both on and off the field,” Director of Athletics Dan Radakovich said.

To view a digital version of the IPTAY 2017 Year in Review, please click HERE.

Originally, the letters IPTAY stood for “I pay ten a year.” Begun in 1934 to give the Clemson athletic program the support it needed, IPTAY is now one of the most successful athletic fundraising organizations in the nation. IPTAY donors provide millions of dollars in scholarships for student-athletes and non-athletes alike. It also has provided substantial support for programs and facilities that help Clemson Athletics stay competitive in collegiate sports.