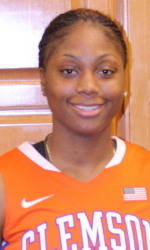 Clemson women’s basketball signee Danaejah Grant was named a 2012 PARADE All-American this week. Grant averaged 24.4 points, 12.3 rebounds, 3.2 steals, and 3.1 assists per game for Piscataway (NJ) High School. The 5-10 guard is ranked as the No. 65 overall player in the 2012 class by ESPN Hoopgurlz.

Grant finished her career with 2,565 points, 1,389 rebounds, and 411 steals in her four seasons. She scored 41 points in her conference tournament game this season, and had 15 double-doubles on the season. She was a finalist for the New Jersey Gatorade Player of the Year, and was a McDonald’s All-America nominee.

Grant will enroll in the second summer school session, and will compete for time at the guard spots immediately.