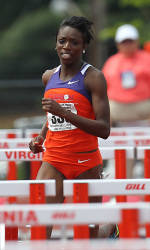 DES MOINES, IA – Clemson’s Bridgette Owens and Brianna Rollins were 1-2 among the eight qualifiers for the women’s 100 hurdles final on Thursday, day two of the NCAA Outdoor Championships. Both indoor All-Americans broke the previous school record of 12.78, set by Rollins earlier this outdoor season. In the men’s high hurdles, indoor All-American Spencer Adams also moved on to Saturday’s final.

Owens wowed the crowd in the first semifinal with her personal best 12.71, a time that ranks among the top 10 in the world according to data available from IAAF.org. Owens’ time was an improvement of over a tenth of a second from her previous best of 12.83 earlier this spring.

Rollins followed in the third semifinal with a dominant effort, running 12.73, also a personal best. Rollins missed a month earlier this year with an injury following the ACC Outdoor Championships, but ran a great race Thursday and will join Owens at 12:14 PM CST in the first-ever outdoor final for both.

“We’re going to stay patient and focused and do the best that we can,” Rollins said. “I felt really good, and am 100 percent ready to go for Saturday.”

Adams preceded the women’s hurdles with an outstanding effort of his own, despite hitting half of the hurdles by his own estimation. He clocked a personal best 13.38 and was fifth-fastest overall, advancing to his first outdoor championship final in three tries. He is scheduled to go Saturday at 12:07 PM CST.

“I felt really good over the first five hurdles, but struggled a little bit on numbers six and seven,” he said. “It’s going to take a really fast time, probably 13.1 or so, to win on Saturday.”

Dezerea Bryant concluded a fine individual freshman season with a solid time of 23.08 in the 200-meter dash semifinals. She was 12th overall, but did not advance to Saturday’s final. Bryant will be a part of Clemson’s 4×100 relay on Saturday, however.

Monique Gracia and Keni Harrison also competed in the 100 hurdle semifinals on Thursday. Gracia ran well with a 13.07 and was ninth overall, but the last athlete left out of the final on time. She concluded her career ranked in the top five in Clemson history for the event. Harrison ran 13.12 and was 11th, giving the Tigers four of the top 11 finishers.

Marcus Maxey’s fine season came to a close on Saturday in his first NCAA meet. He recorded a time of 13.99 in the 110 hurdles and was 20th overall.

The 4×400 relay team struggled early on and finished with a time of 3:44.61. Marlena Wesh anchored the relay, but she saved her legs for Friday’s open 400 final down the stretch when a bid to the finals was out of reach.

The Tigers return to action for a pair of women’s finals Friday. Alyssa Kulik is set for the women’s steeplechase at 6:30 PM CST, followed by Wesh in the 400 dash at 7:02.