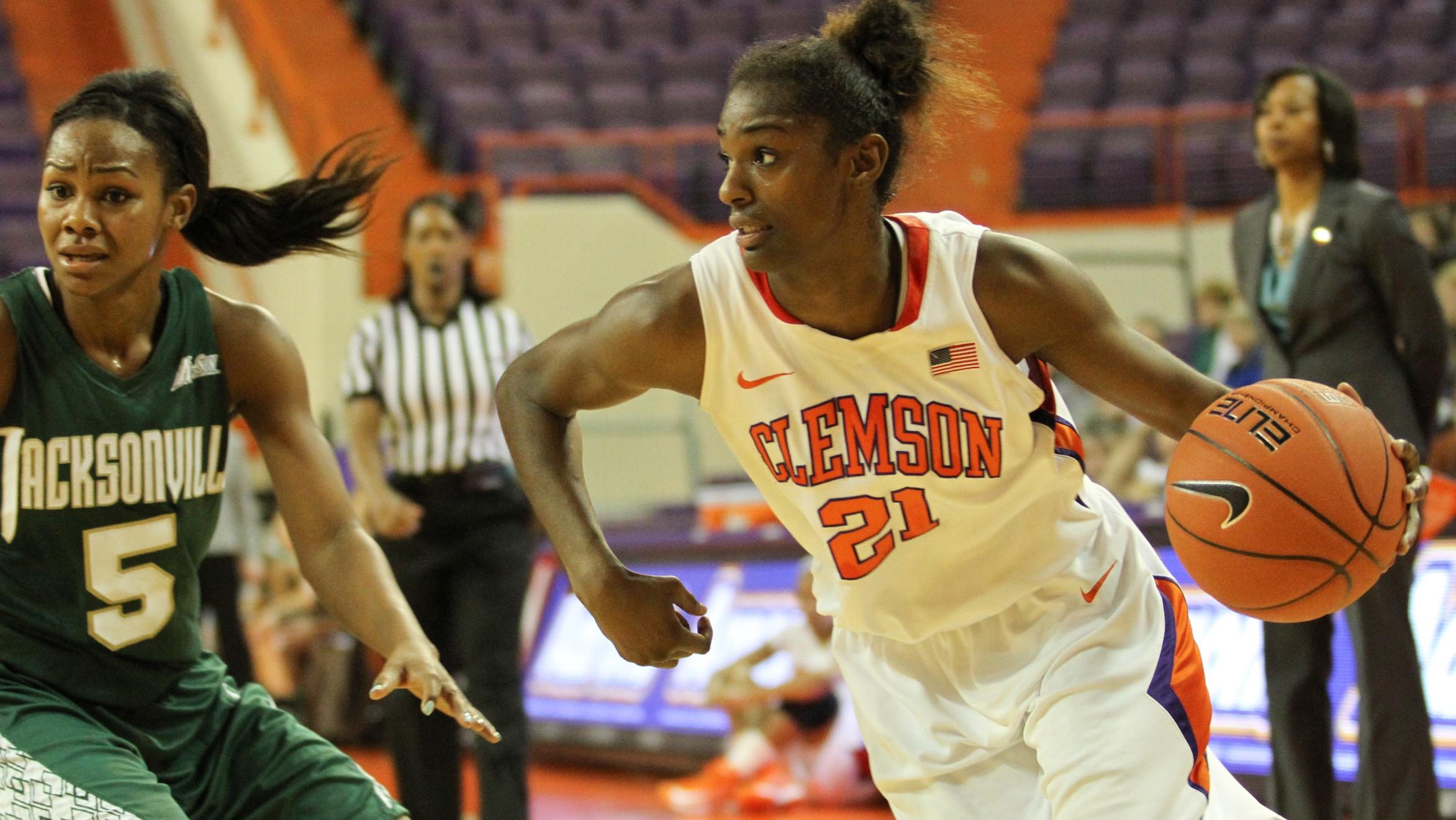 CLEMSON, SC – Five Clemson players scored in double-figures and the Lady Tigers shot .508 in an 87-58 win over Jacksonville (3-4) on Sunday afternoon in Littlejohn Coliseum. Nikki Dixon had a career-high 25 points (9-16 FG, 7-9 FT) and nine rebounds for the Lady Tigers, who shot their highest percentage from the floor since Jan. 30, 2011.

“I just thought it was a great team win,” said Itoro Coleman, who led their Tigers to a win in the first all-time meeting with the Dolphins. “Any time we see the zone, in the past, we would have settled for passing the ball around the perimeter. I thought we did a good job of getting the ball inside, whether it was the high post or off the dribble or the short corner. We really took advantage of our height on the inside.”

Clemson blocked 11 shots and shot 23-38 (.605) in the paint, and outrebounded the Dolphins en route to taking control of the paint.

Jones and Pettaway each added double-doubles as well. Jones had 11 boards, her third double-double of the season, and her fourth game of the season in double-figures rebounding. She also finished with a team-high five blocks, giving her 15 on the season. She entered the game ranked sixth in the ACC in shot blocking and fifth in rebounding.

Pettaway had a career-best 14 boards, and also added five assists in her fifth career double-double. She did see her consecutive free throws made streak end at 12, as she had led the league coming into the game.

Perhaps the most impressive part of Clemson’s victory was the ability to capitalize off Jacksonville’s mistakes. The Dolphins turned it over just 13 times, but Clemson converted those for 23 points, nearly 1.77 points per turnover. The Tigers had 16 points on the fast break, and had 46 points in the paint.

Clemson led from the outset, their only deficit coming less than five minutes in at the 15:29 mark of the first half, when the Dolphins took a 9-8 lead, while they held for 14 seconds before Jones finished a Pettaway pass to give the Tigers the lead for good. Leading 24-21 with 8:53 to play, the Tigers went on an 8-0 run to take a 32-21 lead. Jones had two layups during the run, while Pettaway and Gramlich each hit shots as well.

Clemson went into the break ahead 40-31, their second straight game entering intermission with a lead. Clemson was 14-28 from the floor, and held Jacksonville to a 14-40 (.350) mark.

The Lady Tigers’ second half was one of their most complete of the season. They outscored the Dolphins 47-27, shot .514 percent, and held JU to .333 shooting. Clemson turned it over just five times in the half.

Pettaway had seven points and 11 of her rebounds in the second, while 18 of Dixon’s points came in the second.

After trailing by as many as 13, the Dolphins found themselves trailing by just six points with 13:08 to play after a Queen Alford three-pointer.

In their last game against Indiana, the Tigers let the Hoosiers back into it by settling for jumpers. In this game, Clemson went on a 13-2 run over the next four minutes, capped by a Turner three with 9:33 to play to give Clemson a 63-46 win. Defensively, Clemson held Ju to just four points over the final 5:26, while netting 17 of their own.

Clemson will have a week off from competition before playing host to South Carolina State next Sunday at 2:00 pm in Littlejohn Coliseum.