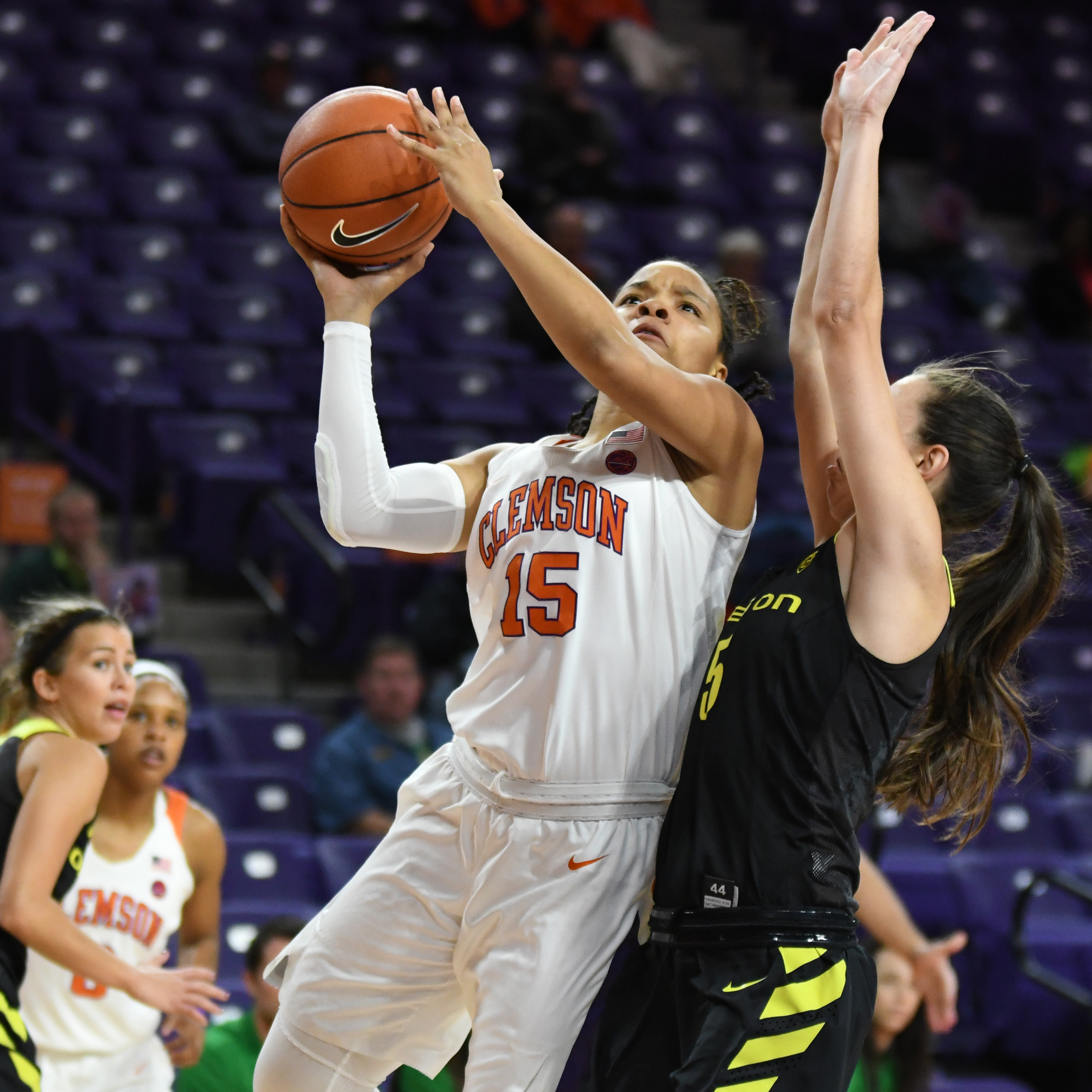 CLEMSON, S.C. – The Clemson women’s basketball team suffered its first loss of the 2016-17 season on Monday night, 87-59, at the hands of a hot-shooting Oregon team which, earlier today, entered the AP top-25 for the first time this year. With the loss, the Tigers fell to 8-1, while the 25th-ranked Ducks improved to 8-1 with the victory.

Oregon started out the game on a hot streak, taking a 15-0 lead in the first three minutes of the game by virtue of shooting 5-for-8 from the field and 3-for-4 from three. After sophomore Danielle Edwards scored Clemson’s first two points, on a layup at the 6:08 mark, the Tigers settled down and their shooting heated up. Three pointers by juniors Nelly Perry, Victoria Cardaci and Alexis Carter (at the buzzer) cut the Ducks’ lead to seven points, 25-18, at the end of the first period.

The Tigers held the Ducks without a field goal for more than 10 minutes, from the 2:33 mark in the first quarter to the 2:27 mark in the second, and cut the deficit to three points at 3:30 in the second after a layup by junior Ivy Atkism before Oregon extended the lead back to eight at halftime, 39-31. The Ducks were 4-for-4 from three-point range in the third quarter, opened up a 65-44 lead by the end of the period, and did not look back.

Perry and freshman Jaia Alexander finished the game tied for the team-high in scoring with 13 points apiece. Alexander was 5-for-11 from field goal range, and also pulled down a team-best seven rebounds. Carter, a native of Portland, Ore., finished with nine for the Tigers.

Oregon shot 52.4% for the game, and 56.3% from three-point range with nine made threes. The Ducks held the advantage in rebounding, 41-27. Sabrina Ionescu finished the game with a triple-double, 23 points, 12 rebounds and 10 assists.

Clemson returns to action in just three days, as the team heads to Columbia, S.C. on Thursday, Dec. 15 to face sixth-ranked South Carolina. Tipoff between the Tigers and Gamecocks is set for 7 p.m. at the Colonial Life Arena.