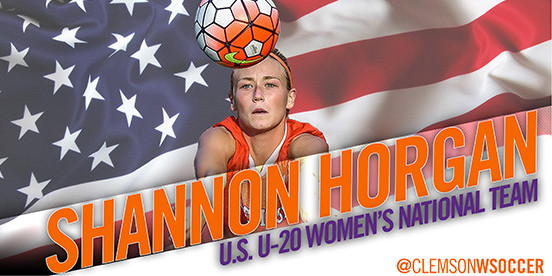 Horgan Named to U-20 USWNT Roster

CLEMSON, S.C. – Sophomore forward Shannon Horgan has been named to the U.S. Under-20 Women’s National Team as announced by the organization on Friday. Horgan was one of eight college aged players to compete with the team in the CONCACAF to the United States that defeated Candada in the finals to earn a berth to the 2016 FIFA U-20 Women’s World Cup. The tournament will be held in Papua New Guinea from Nov. 13 – Dec. 3.

The Long Island, New York native played in all 20 games for the Tigers during the 2015 campaign accumulating 1241 minutes in 19 starts. Horgan scored three goals in 2015 including the game winner against No. 9 Virginia Tech in the 84th minute on October 11th at Historic Riggs Field.