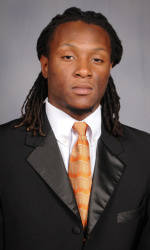 CLEMSON, SC – Clemson wide receiver DeAndre Hopkins, who leads the Tigers with 43 catches for 532 yards and four touchdowns, will join the basketball team following the Meineke Car Care Bowl on Dec. 31. Head Coach Brad Brownell and football coach Dabo Swinney have had ongoing discussions about Hopkins joining the team and on Monday the Tigers’ first-year basketball coach spoke with Hopkins about the situation. Clemson has just four scholarship guards on its roster.

“I have heard great things about DeAndre’s ability as a basketball player, but I’ve never seen him play,” Brownell said. “I talked to DeAndre last night, and there is mutual interest in having him join the team after the bowl game. Certainly, he has shown a great competitive spirit to be able to succeed the way he has on the football field as a freshman. We have a very thin backcourt and he thinks he can help us.”

Hopkins was a standout in both sports at D.W. Daniel High School in Central, SC. He was a three-time all-state selection on the hardwood and led the Lions to their first state championship in basketball in 43 years as a senior in 2010. Hopkins was named to the Elite 5 in 2009-10 by the South Carolina Basketball Coaches Association, an honor given to the top five players in the state. Hopkins tallied over 1,300 points, 600 assists, 400 rebounds and 200 steals in his Daniel High School career.

The 6-foot-1, 195-pound Hopkins established first-year freshman records at Clemson for receptions and receiving yards, and is tied for first in school history among first-year freshmen in touchdown catches.