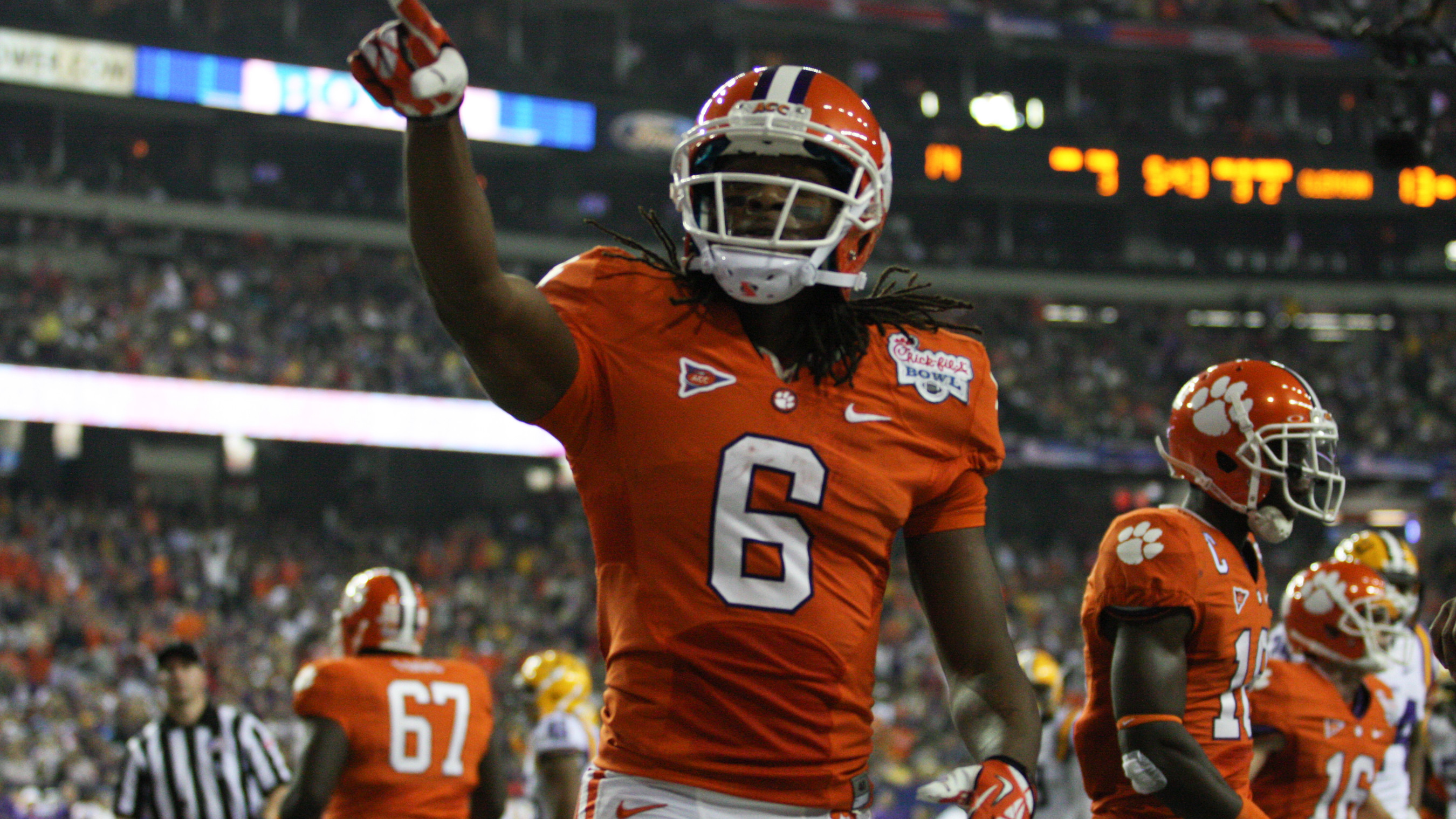 CLEMSON, SC – Clemson wide receiver DeAndre Hopkins has been named to All-Bowl teams by three media outlets. The junior from Central, SC who announced he would turn professional on Thursday, had 13 receptions for 191 yards and two touchdowns in Clemson’s 25-24 win over LSU in the Chick-fil-A Bowl on December 31.

Hopkins 191 yards receiving and 13 receptions were the most among all FBS players in bowl games. The 191 yards were the most by any player in the 45-year history of the Chick-fil-A Bowl, and a Clemson bowl game record. His 13 receptions tied his own Clemson single game record for any game. He also had 13 catches against Auburn in the season opener of 2012 in the same Georgia Dome.

Clemson kicker Chandler Catanzaro was also named to the Collegefootballnews.com All-Bowl team. The junior was 2-2 on field goals in the win over LSU, including a 37-yard walk-off field goal that gave the Tigers the one point victory. It was the second walk-off field goal of his career, as he also had the winning kick on the last play against Wake Forest in 2011.

ESPN.com selected an All-ACC Bowl team from the bowl season. The Tigers had eight players on that team, more than any other school in the conference. Clemson had four players on offense, three on defense and one on special teams.

Tajh Boyd was named the quarterback after completing 36-50 passes for 346 yards and two touchdowns. He also had 29 rushes for 22 yards, giving him 368 yards of total offense. His completion total, passing yards and total offense were all Clemson bowl game records.

DeAndre Hopkins was named to the team after catching 13 passes for 191 yards and two scores. He became just the second Clemson player to have two touchdown receptions in a bowl game.

The man he joined in that record was Brandon Ford, who was also named to ESPN.com’s All-ACC Bowl team. The senior had nine receptions for 69 yards. The nine receptions tied the Clemson record for receptions in any game by a tight end. Ford had two touchdown catches as a sophomore in the Meineke Car Care Bowl against South Florida.

Starting center Dalton Freeman was also named to the team. Playing in his final game, he was a big reason Clemson ran 100 plays and gained 445 yards of total offense against LSU’s top 10 defense. Freeman made his 49th consecutive start in the contest, tying the record for total starts by a Clemson player, and setting the mark for consecutive starts.

Chandler Catanzaro also made the ESPN.com All-ACC Bowl team after kicking the game winning field goal from 37 yards out on the last play of the game.

Clemson had three defensive players on the team as well. Clemson held LSU to 219 yards of total offense, the second lowest total offense game of the season for Les Miles’s team.

Malliciah Goodman made the squad after recording three sacks, the most sacks in a bowl game in Clemson history. Rashard Hall led the Tigers in tackles in the game with 10 and was also selected. Sophomore Grady Jarrett also was named for his performance. The sophomore defensive lineman had two tackles for loss, including a sack and was a big reason LSU had just 99 yards rushing in the game.