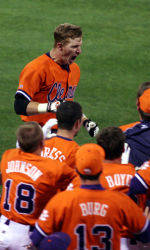 Doug Hogan’s home run to left-center in the 11th inning gave #17 Clemson a 3-2 win over #19 Georgia Tech Friday night in front of 5,239 fans at Doug Kingsmore Stadium. After the Yellow Jackets scored two runs in the top of the 10th, Clemson tied the score in the bottom of the 10th after the first two batters of the inning were retired. The Tigers took the first game of the series and improved to 28-14 overall, 12-7 in the ACC. The Yellow Jackets dropped to 26-16 and 13-8 in conference play.

Junior reliever Alan Farina (3-1) pitched the 11th inning without allowing a hit and striking out two to earn the win. It was also the best outing of starter Daniel Moskos’ career despite him not factoring in the decision. He struck out a career-high eight batters in a career-long 6.1 innings. He also allowed just five hits and no runs.

The first two Tigers in the bottom of the 10th were retired. But pinch-hitter Alex Lee singled to left and advanced to second on a wild pitch. D.J. Mitchell then struck out, but a wild pitch allowed him to reach first and extend the game. Wilson Boyd then drove Lee home with a single through the right side, as Mitchell moved to third. Lee, Mitchell, and Boyd all reached successfully after facing a two-strike count. Mitchell then tied the score on a passed ball by reserve Nick Scherer. Taylor Harbin followed with an infield single and D’Alessio was intentionally walked to load the bases. But Marquez Smith grounded out to end the inning.

After the Yellow Jackets went down in order in the top of the 11th, Hogan, the leadoff batter in the frame, blasted a 1-1 fastball over the fence in left-center to give Clemson the dramatic come-from-behind win. It was his team-leading eighth long ball of the season.

It was Clemson’s first win on a walkoff homer of 2007 and the first since Tyler Colvin’s walkoff homer against Oral Roberts in the 2006 Clemson Super Regional.

Hogan led the Tigers offensively with a team-high two hits. Crancer went 3-for-4 with an RBI for the Yellow Jackets, who outhit the Tigers 10-8.

Clemson and Georgia Tech will play game-two of the three-game series Saturday at 7:00 PM at Doug Kingsmore Stadium.