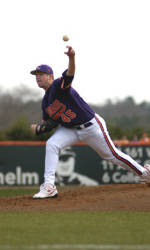 Sophomore lefthander Marquez Smith hit a solo homer in the eighth inning to lead #13 Clemson to a 2-1 victory over #6 Virginia Sunday afternoon in front of 4,720 fans at Doug Kingsmore Stadium.

Clemson continued its run of outstanding starting pitching. Hinson (4-1) silenced the Cavalier bats, surrendering only one hit over 6.1 innings. He struck out five and walked five, as he held Virginia hitless in the first six innings. Alan Farina earned his first save as a Tiger, as he pitched 2.2 solid innings of relief, allowing one run on two hits and striking out one. Hinson and Farina combined to allow just three hits, two less than Virginia’s previous season-low total.

Starter Sean Doolittle (6-3) took the loss for Virginia after allowing one run off five hits with six strikeouts in 6.0 innings pitched.

The Tigers grabbed a quick lead in the first inning. D.J. Mitchell hit a one-out single to left and D.J. Mitchell and put the Tigers on the scoreboard.

Virginia threatened in the seventh, as leadoff batter Patrick Wingfield doubled down the left-field line on an 0-2 pitch. He advanced to third on a sacrifice bunt by Tyler Cannon. Pinch-hitter Tim Henry then hit a hard grounder, but it was right at D’Alessio at first base, as Wingfield was forced to hold at third. Greg Miclat drew a walk and then stole second. But Brandon Marsh flied out to center to end the inning.

In the eighth inning, Harbin led off with a bunt single. D’Alessio then lined a ball that appeared to be headed to the left-field gap, but leftfielder Brandon Guyer made a spectacular diving catch. The Cavaliers doubled Harbin off first for the double play. But, Smith hit his seventh homer of the year, a solo shot off a 2-1 pitch to left field, to put the Tigers on top 2-0.

That insurance run proved pivotal, as the Cavaliers threatened to tie the score in the ninth. With one out, Cannon and Tim Henry drew back-to-back walks. Miclat followed with a run-scoring single through the right side that plated Cannon. But Marsh grounded into a game-ending 6-4-3 double play.

The Cavaliers were just 1-for-14 with runners on base, 1-for-11 with men in scoring position, and 0-for-8 with two outs. Virginia also left 10 runners on base in the game.

Clemson’s win snapped Virginia’s eight-game winning streak over the Tigers, who had last beaten the Cavaliers in 2005.

Clemson returns to action at Doug Kingsmore Stadium on Tuesday against Elon. First pitch is scheduled for 7:15 PM.