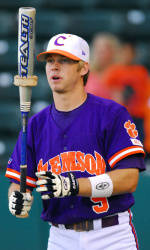 Freshman lefthander Chris Hernandez pitched 8.0 scoreless innings with 10 strikeouts to lead #2 Miami (FL) to a 7-1 victory over Clemson in front of 4,662 fans on Wednesday afternoon in the ACC Tournament at The Baseball Grounds of Jacksonville. The Hurricanes improved to 44-8, while the Tigers dropped to 30-26-1. It was Miami’s first-ever win in three tries over Clemson in ACC Tournament play.

Hernandez (11-0), the ACC Freshman-of-the-Year, kept his unblemished record intact by tossing 8.0 innings, allowing four hits (all singles) and no walks with 10 strikeouts. He faced just two batters over the minimum, as the Hurricane defense turned three double plays behind him.

Tiger starter D.J. Mitchell (6-5) suffered the loss, as he yielded eight hits, seven runs (six earned), and three walks with 11 strikeouts in 6.0 innings pitched. It was the first time in his 35 career appearances that he gave up more than four earned runs.

Mitchell’s 11 strikeouts were the most by a pitcher in an ACC Tournament game held at Jacksonville, which has hosted the event from 2005-08. The strikeout total was also the most by a Tiger pitcher since 2003, when lefthander Tyler Lumsden struck out 11 in two different games that season.

The Hurricanes took advantage of some “free passes” to take the game’s first lead in the first inning. Jemile Weeks and Yonder Alonso drew one-out walks. Both runners moved up on a wild pitch, then Mark Sobolewski laced a 3-2 fastball up in the strikezone for a double to left field to score Weeks and Alonso. Two batters later, Ryan Jackson lined a two-out single up the middle to score Sobolewski.

Yasmani Grandal gave Miami a 4-0 lead in the second inning when he hit a solo home run to right field, his fourth of the season.

The Hurricanes added to their lead with three runs in the sixth inning. Dennis Raben led off with a single through the right side and advanced to second on Jackson’s walk. Two batters later, pinch-hitter Joey Terdoslavich bounced a double over first-baseman Ben Paulsen. Raben scored from second and Jackson scored from first when Kyle Parker booted the ball in the right-field corner. Then with two outs, Blake Tekotte singled to left field to plate Terdoslavich.

In the ninth inning, J.D. Burgess led off with a walk and went to second on Mike Freeman’s single through the right side. Three batters later, Burgess scored on Parker’s fielder’s choice.

Miami made efficient use of its 11 baserunners, as seven scored. Eight different Hurricanes had one hit and seven scored one run. Sobolewski had a game-high two RBIs.

Freeman had a game-high two hits for the Tigers, who totaled six hits.