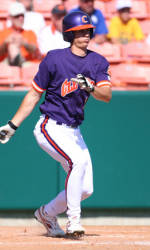 Reese Havens hit a grand slam and two Tigers errors led to six unearned runs, as #3 South Carolina defeated #13 Clemson 10-1 on Saturday afternoon in front of 5,921 fans at Sarge Frye Field. The Gamecocks improved to 4-1, while the Tigers fell to 5-1. It was the first of four regular-season meetings between the two rivals.

Mike Cisco (2-0) pitched 7.1 strong innings, allowing one run on eight hits to earn the victory. He also walked one and struck out four. Clemson starter Ryan Hinson (1-1) pitched 6.0 solid innings, but he was hurt by two errors behind him. He allowed six hits, seven runs (one earned), and no walks with five strikeouts.

The Gamecocks dented the scoreboard in the first inning with one run. Whit Merrifield laced a one-out triple to right-center and scored on James Darnell’s groundout to shortstop.

South Carolina stretched its lead to 5-0 in the second inning thanks to a costly Tiger error. With one out, Harley Lail reached on a throwing error by third-baseman Kyle Parker. Kyle Enders followed with a single to left field and Justin Hopper struck out for out #2. After Scott Wingo loaded the bases with a hit-by-pitch, Havens blasted a grand slam to right field, his fourth long ball of the season. It was also the junior’s first career RBIs against the Tigers in his ninth game versus Clemson.

In the top of the fourth inning, singles by Doug Hogan, Ben Paulsen, and Parker loaded the bases with two outs. Hogan’s single extended his hitting streak to 21 games. Jeff Schaus then lofted a ball into left-center that would have scored at least two runs, but Hopper made a diving catch to end the inning.

Another Tiger miscue led to two more Gamecock runs in the sixth inning. Leadoff batter Justin Smoak hit a high flyball to right field that fell when Chris Epps overran the ball. Two batters later, Lail singled through left side, advancing Smoak to third base. Kyle Enders followed with a sacrifice fly to left-center to score Smoak. Hopper then bounced a single past Parker to score Lail.

Clemson finally got on the scoreboard in the top of the seventh inning. Alex Lee drew a two-out walk and advanced to second on a wild pitch. J.D. Burgess then ripped a double to left-center to plate Lee.

The Gamecocks responded with two runs on three hits in the bottom of the seventh inning. Havens led off with a single through the right side. Two batters later, Darnell walked and Smoak followed with a sharp single up the middle to score Havens. Phil Disher then reached on a fielder’s choice that scored Darnell.

In the eighth inning, Hopper led off with a double to center. The next two Gamecocks hit flyballs to the outfield, with the latter by Havens scoring Hopper on a sacrifice fly.

Havens went 2-for-4 with a grand slam and career-high-tying five RBIs for the Gamecocks, who totaled 10 hits and only left four runners on base. Lee was the lone Tiger with multiple hits, as he was 2-for-2 with a walk and run scored. Clemson stranded nine runners on base as well.

Clemson and South Carolina will play the second of four regular-season games on Sunday at Doug Kingsmore Stadium at 2:00 PM.