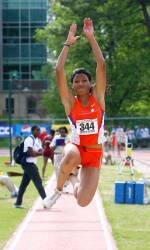 Clemson, SC – Polly Hardy and Patricia Mamona of the women’s track & field team have made the trip to Des Moines, IA this week to compete in the NCAA Outdoor Championships at Drake University. Mamona is competing in her second straight NCAA outdoor meet, while Hardy is competing in her first-ever national meet as a senior.

Hardy earned an at-large bid to the NCAA Championships following an impressive sixth-place finish in a loaded East Regional field. The Anderson, SC native is only the second high hurdler in Clemson history to compete at outdoor nationals, joining Nikkie Bouyer (1996, 1998) in the exclusive club. Hardy ranks in a tie for second in school history with a personal best time of 13.44 in the 100m hurdles.

Mamona competed at last year’s NCAA Outdoor Championships in the triple jump, finishing 11th in the finals after the ninth-best preliminary round mark. She is seeking her first-ever All-America certificate. She is four-time All-ACC in the triple jump and has been All-East Region in the event each of her first two years with the Lady Tiger program. She ranks second in school history in the event, behind only former All-American Gisele Oliveira.

The preliminary round for the triple jump is scheduled for 7:00 PM Friday evening. The top 12 individuals advance to the finals, which will be held Saturday at 3:00 PM.