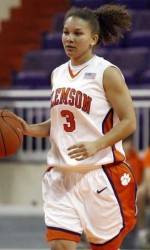 Clemson, SC – Clemson senior Lele Hardy broke the school’s career steals record as the Lady Tigers (9-4) beat the Wofford Terriers (1-10), 67-51, on Monday night in Littlejohn Coliseum. She finished with a season-high 21 points and 10 rebounds to lead Clemson, who remained unbeaten at home on the season.

With her three steals on the night, Hardy also moved into eighth all-time in the ACC in career steals, with 330. Hardy is also the ACC’s active leader in double-doubles, tallying the 27th double-double of her career and fifth of the season. She also added five assists on the evening.

“Lele is our most consistent player,” said head coach Cristy McKinney. “I was so proud of her when she broke the record as the all-time leader in steals. She’s a great athlete and I know we will be seeing greater things from her as the season progresses.”

For the second consecutive game, Bryelle Smith gave Clemson the lead for good on a three-point basket. On Saturday, her three in overtime gave Clemson an 80-77 lead that they would not relinquish.

Sthefany Thomas had 10 points in 19 minutes. Clemson held Wofford to 26.2% shooting in the game, including 8-32 in the second half. The Tigers also had 54 rebounds to Wofford’s 40, and Clemson is now 8-0 when outrebounding an opponent.

Clemson entered the game leading the ACC with 17.3 assists per game, and topped that number, registering 18 on 27 made field goals.

In the second half, with the score tied at 36, a 3-point basket by Bryelle Smith with 12:47 left put the Tigers ahead for good. The Tigers then went on a 31-15 run to finish the game. The Tigers are 5-1 against teams from South Carolina, the most wins by Clemson against South Carolina teams since the 1994-95 season.

Mahagony Williams finished the night with a double-double for the Terriers, notching a team-high 14 points and 14 rebounds.

The Tigers led 28-24 at halftime, behind the solid play of Hardy, with 10 points and two steals. Shaniqua Pauldo finished the half with 8 points, a perfect four-for-four from the field. The defense of the Tigers held the Terriers to 27.6% shooting and Mahagony Williams led the Terriers in the first half with nine points and seven rebounds.

Clemson will be off until Dec. 28, when they will play host to a top-15 Georgia team at 7:00 pm. The game will be televised live on CSS.