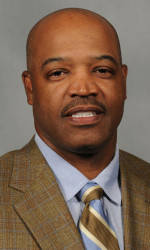 CLEMSON, SC – Clemson assistant coach Charlie Harbison has been named one of the top 25 recruiters in the nation by Rivals.com. Harbison was one of four ACC coaches on the list. He joined James Coley and Lawrence Dawsey of Florida State and James Franklin of Maryland.

Clemson ranked 18th in the nation in the final Rivals.com recruiting rankings.

Harbison signed six of Clemson’s 23 prospective student-athletes in the 2010 class announced on Feb. 3. All six of the prospects were from out of state, three from Georgia and three from Alabama.

Harbison helped the Tigers to a 9-5 record this past season as the co-defensive coordinator and secondary coach. The Tigers had 21 interceptions to rank in a tie for fifth in the nation, and ranked seventh in the country in passing yards allowed per game with 162.8.

Among the players he coached was DeAndre McDaniel, who led the ACC in interceptions with a Clemson record tying eight. He was also named a first-team All-American by the Football Writers Association.

This is Harbison’s second tour of the duty with the Tigers. He also coached the defensive backs from 1995-97. Among the players he coached at Clemson in his first stint was Brian Dawkins, who has gone on to become a seven-time Pro Bowl safety in the NFL.