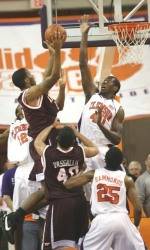 Clemson seniors Cliff Hammonds and James Mays were among seven players named to the Fan’s Guide to ACC Basketball All-Defensive Team on Tuesday. The seven-player team is compiled by vote of the league’s 12 head coaches. The 2008 selection is the second straight for Mays, and first-ever for Hammonds.

The coaches vote for five defenders whom they consider the league’s best, regardless of position. They also are granted anonymity and given the option to cast votes for their own players, a privilege employed by most coaches in 2008. This season marks the 13th annual All-Defensive team publicized by the Fan’s Guide to ACC Basketball.

Hammonds ranks third in the ACC in steals per game (1.93) and second in Clemson history with 217 career steals. Hammonds leads the Tiger defense this season with 58 steals and is a major reason Clemson ranks sixth in the NCAA with 9.7 steals per game. His top defensive play of the year was a blocked shot on a dunk attempt by Maryland forward James Gist. Hammonds broke his right wrist bracing himself on the fall, and will wear a protective cast for the remainder of the season.

The honors have been coming at an alarming rate for Hammonds this season. Off the court, he was named to the Academic All-ACC team for the third time in his career. He also was a CoSIDA Academic All-District III selection. In the past two days alone, he was named third-team All-ACC and honorable mention All-ACC Defense by the Atlantic Coast Sports Media Association (ACSMA). He also was named All-District III Tuesday by the U.S. Basketball Writers Association (USBWA).

Mays was named to the Fan’s Guide All-Defensive team last season after establishing a Clemson record for steals (69) by a frontcourt player. He is the school’s all-time leader in steals (162) among post players, and ranks fifth in the ACC this season with 1.84 steals per game. Mays also ranks among the top 10 in Clemson history with 92 career blocked shots. Mays was also honorable mention All-ACC Defensive team by the ACSMA.