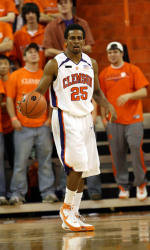 Clemson, SC – Clemson captain Cliff Hammonds said after practice Tuesday evening that he expects to play against Georgia Tech on Thursday in Atlanta as long as he gets through practice on Wednesday without further injury to his broken right wrist.

Hammonds suffered the injury to his non-shooting hand while blocking a dunk attempt by Maryland 6-9 forward James Gist in the second half of the Tigers 73-70 victory on Sunday. Hammonds played the last 16 minutes of the game with the injury, but X-rays revealed the break on Monday.

The senior from Cairo, GA practiced with the Clemson team on Tuesday and wore a protective cast. He is expected to play with a less restrictive brace on Thursday evening. “Cliff practiced today and it appears he can still take care of the basketball,” said Clemson Head Coach Oliver Purnell. “If he can practice tomorrow then we will tape him up with a heavy bandage and he will play on Thursday night at Georgia Tech.”

“I am not going to stop playing the way I am playing, I am still going to give it my all,” said Hammonds, who has never missed a game in his Clemson career. “There is some pain, but not as much as yesterday. Hopefully I will be able to do all I can to help this team beat Georgia Tech.”

Hammonds is the fourth Clemson player this year to suffer a major injury, the second to suffer a broken wrist or hand. Earlier this year Clemson senior forward James Mays suffered a broken left hand and a hip injury. He missed five games due to the hip injury, but played with a brace on the hand and continued to play in January and February. He just took off the brace in the second half of the Maryland game, minutes before Hammonds suffered his injury. Senior Sam Perry also missed six games in November and December. Point guard Demontez Stitt missed two games after having knee surgery.