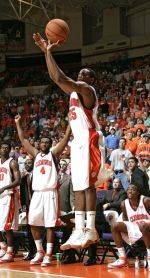 Clemson men’s basketball Head Coach Oliver Purnell has named the team’s captains for the 2006-07 season. Vernon Hamilton and Cliff Hammonds, the Tigers’ starting backcourt, will be the team leaders this season. The duo is perhaps the most experienced tandem in the ACC, with 122 career starts between the two guards.

“We expect that Vernon and Cliff will be outstanding leaders for us this season,” said Purnell, who is now in his fourth year in charge of the Tiger program. “Both young men have the respect of their teammates because of their actions, both on and off the court. Both players have tremendous toughness and both are passionate about continuing to help move this program in the right direction.”

Hamilton was an All-ACC Defensive selection last season after leading the conference in steals per game. He was the first Clemson player ever to lead the league in that statistical category. He ranks first in school history in both career and single-season steals. Last season, he improved his scoring average from 6.8 points per game as a sophomore to 12.0 per game as a junior.

Hammonds ranked in the top 10 in the ACC in both steals per game and assist-to-turnover ratio. He ranked second on the team behind Hamilton in steals and helped the Tigers to a #2 national ranking in steals per game last season. Hammonds is also the first Clemson player since Terrell McIntyre (1995-99) to post at least 10 points per game in each of his first two seasons as a Tiger.