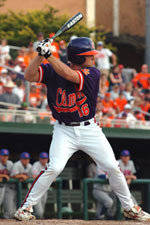 Pinch-hitter Ben Hall hit a walkoff single through the left side in the ninth inning to score Taylor Harbin and lift #2 Clemson to a 3-2 win over #7 Georgia Tech in the second round of the ACC Tournament at the Baseball Grounds of Jacksonville on Thursday evening. The Tigers advanced to the bracket final against the winner of Friday’s Georgia Tech-Miami (FL) game on Saturday at 1:00 PM. That winner must beat Clemson twice to advance to the ACC Tournament final on Sunday.

Clemson improved to 45-13 and upped its winning streak to 17 games, tied for the fourth-longest streak in school history. Jack Leggett, in his 13th season as head coach at Clemson, picked up his 600th win as the Tiger skipper. Georgia Tech fell to 43-15. The game did not start until 10:18 PM due to a lengthy rain delay in the third game of the day, as the game ended at 12:34 AM.

Daniel Moskos (4-4) picked up the win in relief, as he allowed one run on three hits with three strikeouts in 2.0 innings pitched. Starter Stephen Faris did not factor in the decision, but pitched 7.0 stellar innings, allowing just three hits, one run, and two walks with eight strikeouts. Yellow Jacket reliever Matt Wieters (1-2) suffered the loss after entering the game to start the ninth inning. Starter Lee Hyde pitched a season-long 8.0 innings, allowing two runs on seven hits as well.

Nine Tigers had one hit apiece, including a double by Tyler Colvin. The hit extended his hitting streak to 17 games. Mike Trapani had a game-high two hits, as Faris and Moskos limited the Yellow Jackets to only six hits after entering the game with a .321 team batting average.

The Tigers took a 2-0 lead in the second inning thanks to two, two-out, run-scoring hits. Stan Widmann hit a one-out single up the middle and stole second by beating a pickoff attempt. Two batters later, Adrian Casanova lined a two-out single to left to score Widmann. Herman Demmink then hit the next pitch to the wall in left-center to plate Casanova on a triple.

The Yellow Jackets cut the Tiger lead in half in the fourth inning. Whit Robbins drew a two-out walk and came around to score on Wes Hodges’ single off the wall in right field.

In the eighth inning, Steven Blackwood led off with a single up the middle and Wally Crancer advanced Blackwood to second on a sacrifice bunt. Wieters struck out for out #2. After Moskos just missed on a two-strike pitch to Jeff Kindel, the Yellow Jacket leftfielder singled up the middle on the next pitch to score Blackwood and tie the score.

Harbin led off the ninth inning with a double to left-center. After the next two batters were retired, Hall, a senior from Ormond Beach, FL, came off the bench and bounced a single through the left side, as Harbin scored well ahead of the throw from left field to give Clemson its third walkoff win, including second on a walkoff hit, of the season.

Clemson will await the winner of Friday’s Georgia Tech-Miami elimination game on Saturday at 1:00 PM in a game televised live by CSS. The Tigers will be the visiting team and occupy the first-base dugout for any and all games on Saturday.