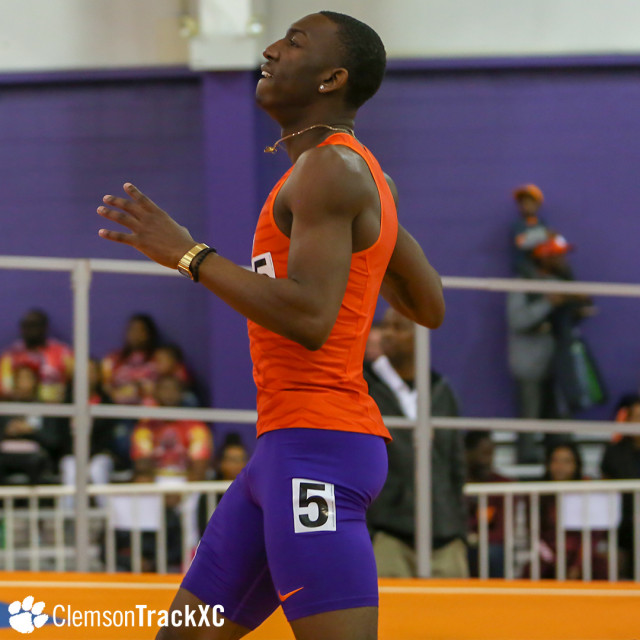 CLEMSON, S.C. – Clemson senior Jeffrey Green set the all-time program record in the men’s 400m dash at the Tiger Paw Invitational, which was held at the Clemson Indoor Track & Field Complex Friday. The senior, who previously held the No. 6 time in Clemson history, ran a 45.87 to shatter Wesley Russell’s 1993 record of 45.92 seconds. Green placed second in his heat and fourth overall against an elite group of sprinters.

Fifth-year senior Marketa Marcanikova earned her second first-place finish in the women’s 5000m run, setting a personal best of 16:56.83. Elizabeth Dawson finished in second, just behind Marcanikova, for her highest career finish in the 5000m. Dawson’s time of 16:57.47 is also a personal record.

In route to posting the ACC’s No. 2 time in the women’s 400m dash, Olivia James claimed fourth place in the event among a competitive field of 47 runners. James won the second heat after achieving her season best of 53.72 seconds.
In the men’s 5000m, James Quattlebaum PR’d to place third overall. Quattlebaum crossed the finish line in 14:32.40, which is good for 11th in the ACC entering today.

Torie Robinson placed sixth in the final event of the day, the 60m dash, with a time of 7.31. The senior currently ranks second in the ACC and tied for ninth in the nation from her time of 7.27 seconds, which she set at the Bob Pollock Invitational on Jan. 26.

Clemson returns for day two of the Tiger Paw Invitational Saturday with the women’s weight throw, women’s high jump and men’s triple jump beginning at 11 a.m. The women’s 800m run will kick off the first track event of the day, which is slated for noon. The meet concludes with the 4x400m relay. Live results for the Tiger Paw Invitational can be accessed on clemsontigers.com.