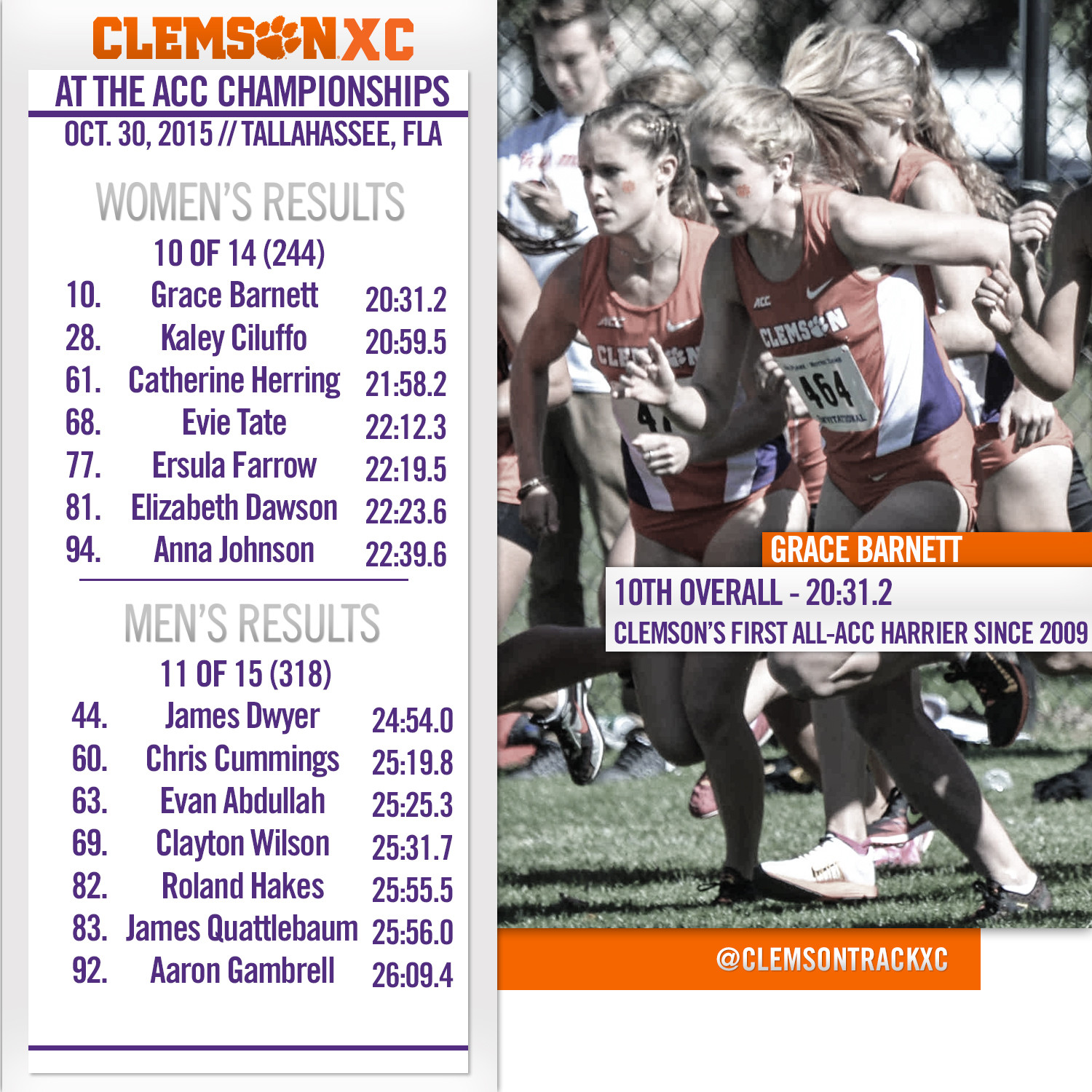 TALLAHASSEE, Fla. – On Friday afternoon Grace Barnett led the Tigers in the 2015 ACC Championships, placing 10th overall and crossing the finish line at 20:31.2. The junior walk-on is Clemson’s first female All-ACC harrier since 2009.

“This race means a lot to me especially after finishing second to last my freshman year,” said Grace Barnett. “I’m very grateful for the patience and support shown from my coaches the past wo years in developing me as a runner.”

“Some schools, some we even ran against today, sent me me back generic emails regarding my times as not fit to try out for their program. But, Clemson gave me a chance and for that I am so grateful.”

The women finished 10th overall and just two points out of ninth thanks to a 28th place effort from freshman, Kaley Ciluffo. The freshman finished second on the team and just seven places out of qualifying for the All-ACC team after crossing the finish line at

“Grace went from a walk-on to a 10th place, All-ACC distance runner which is awesome to see as coaches, awesome for her and for this program,” said head coach Mark Elliott. “For Kaley to run the way she did today with her struggles this summer was great and Catherine ran a great race as well.

“The women ran the best race they could today. They gave it all they had.”

Catherine Herring finished third for the Tigers and a minute behind Ciluffo at 21:58.2 for a 61st place finish. Evie Tate and Ersula Farrow scored as well as they finished 68th and 77th respectively. Tate finished the course in 22:12.3 while Farrow turned in a 22:19.5 effort in her second collegiate race.

“The team had some very strong performances,” said Barnett. “We have an icredible group of girls who show so much love and support for one another, good and bad, and that is something special.”

James Dwyer led the men in a 11th place effort with his time of 24:54.0, placing him 44th overall. Chris Cummings, Evan Abdullah and Clayton Wilson all finished within 12-seconds of each other with Cummings leading the trio in 60th place, Abdullah finished 63rd and Wilson placed 69th. Roland Hakes rounded out the scoring five placing 82nd overall.

Both teams are back in action Friday, November 13 in Charlottesville, Virginia at the NCAA Southeast Regionals.