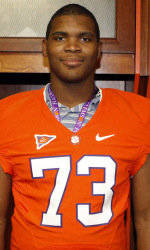 CLEMSON, SC – Clemson freshman defensive end Joe Gore suffered a knee injury last Thursday during a workout. The injury required surgery and he is expected to miss at least the next six to eight weeks, which includes at least the first two weeks of August camp.

Gore enrolled at Clemson last January and went through Spring practice. He had a sack as a defensive end in the spring game.

The native of Lake Waccamaw, NC had 24 tackles for loss, including 12 sacks and nine blocked kicks for East Columbus High School last year.