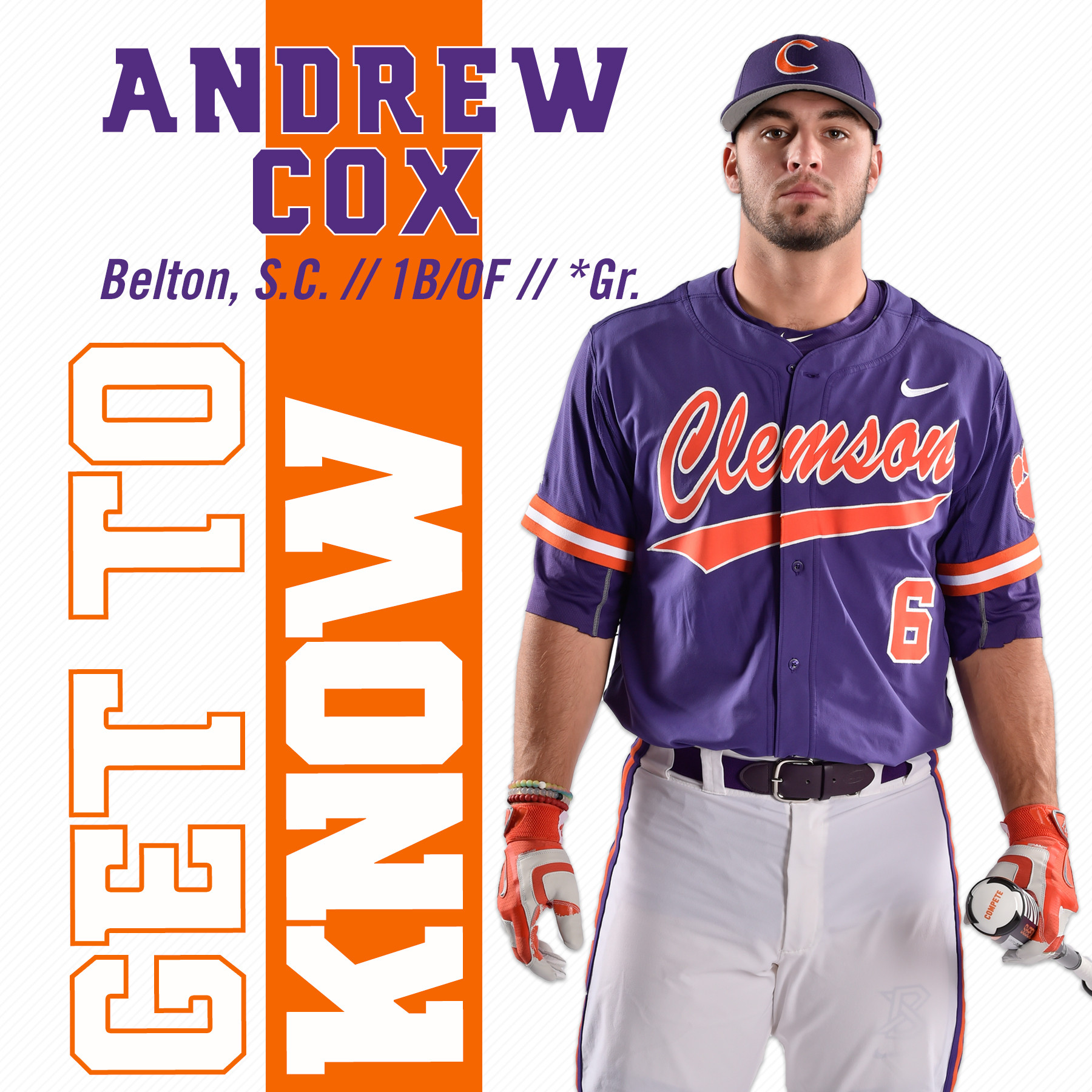 Get To Know Andrew Cox

If there was ever a Mr. Clemson of baseball, it’s Andrew Cox.

A familiar face with an even more familiar supportive voice on the field, the redshirt graduate knew from an early age that he wanted to wear the orange and purple in college.

“I grew up a huge Clemson fan and followed all of Clemson athletics my whole life,” remembered #6. “Coming to games when I was little and seeing those guys on the field, they were heroes to me. I wanted to be like them and be able to trot out each game and actually be playing for Clemson.

“It’s hard to put that in perspective sometimes when times are tough, but you always have to bring yourself back to getting to put on that jersey and trot out with your teammates at Doug Kingsmore Stadium in front of those fans. That doesn’t ever get old.

Heading into his last opening day as a Tiger, Cox is not taking anything for granted, and he wants to enjoy the journey of his final season by getting the most out of himself that he possibly can.

“This last year is everything,” he expressed. “It’s probably the last time I’ll get to put on a jersey, and it’s definitely the last time I’ll get to represent Clemson, and that’s something that was a lifelong goal of mine. I’m going to take each day as what it is and try to appreciate the time I get to spend with my teammates and the time I get to spend being in and around the stadium, because it’ll be gone before I know it.”

But before he is done, there’s still a whole season left to be played, and Cox thinks people should come out to games because the excitement around all Clemson sports has never been higher.

“Fans should come because this university’s sports programs are definitely on the rise,” said the Belton, S.C. native. “A (football) national championship, our success last year…I think there’s a really good buzz around athletics here at Clemson, and they’re going to see a fun team that gives everything they have each time they take the field when they come to baseball games.”

The first baseman is not only appreciative of the fan support he has seen over the years, but also for everything that Clemson has provided him and the people that he has had the chance to meet.

“My Clemson experience has shaped me into the person that I am,” he reflected. “Everything that my life revolves around is here, with baseball and friends and my involvement in the community. It’s been everything that I envisioned it to be, and I’ve had an unbelievable experience being able to represent this university.”

For Cox, being recognized as a leader of the team is an honor, and he hopes that fans can remember him as someone who led by doing things the right way and always doing things with love for his teammates and school.

“Through it all, whether it was the lowest of lows or the highest of highs, I hope people can look at me as a good teammate. I feel like the program has gotten better since I’ve been here, and I hope people will welcome me back after I’m gone. Just remember me as a fun-loving, happy guy who loved playing the game and played it the right way.”