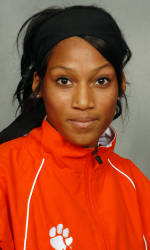 GREENSBORO, N.C. – Georgia Tech’s James Lemons and Clemson’s Patricia Mamona were named the Atlantic Coast Conference Indoor Track Performers of the Week for the week ending on Sunday, Jan. 20, after combining to set the league’s top times in three events at the Clemson Invitational over the weekend.

Lemons, a senior from Atlanta, Ga., competed in the triple jump and in the 60 meter dash in Clemson, S.C. With a mark of 52-08.25 in the triple jump, he took first-place at the meet and placed himself atop the league’s season performances list in the event. With the mark, Lemons also achieved the NCAA provisional qualifying standard. He is currently one of just eight athletes in the league to have met the men’s provisional mark in any event this season. With a 6.99 second finish in the 60 meter dash, Lemons recorded one of the top 10 times of the year in the conference, and finished 13th at the meet.

Mamona took part in both the long jump and triple jump at the Clemson Invitational, setting the league’s top mark of the season in each. In the long jump, the sophomore from Lisbon, Portugal, posted a mark of 19-05.25 to finish first at the meet. With a 41-06.50 performance in the triple jump, Mamona placed second at the meet, again setting the top mark of the season in the ACC, and also achieving the provision NCAA qualifying mark.

Georgia Tech and Clemson will again be in action this weekend when both teams travel to Gainesville, Fla., to compete in the Tom Jones Memorial Classic.