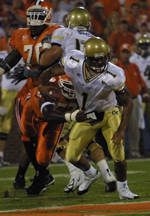 Kickoff for Saturday’s Georgia Tech-Clemson football game has been moved to 3:30 p.m. at Bobby Dodd Stadium/Grant Field, the Atlantic Coast Conference announced Tuesday. The game will be nationally televised on ESPN.

The change was necessitated by the effects of Hurricane Wilma. Miami hosts North Carolina Saturday at the Orange Bowl in a game that was originally scheduled for 3:30 p.m. However, the Orange Bowl’s lighting system was damaged by the hurricane, so that game had to be moved to 12 noon. The Tech-Clemson game will now fill the ESPN timeslot at 3:30 p.m.

ACC Commissioner John D. Swofford: “In talking with Miami officials it was evident that lights in the Orange Bowl would not be available and consequently a 3:30 start on Saturday was simply not workable. Our television partners at ESPN as well as officials at Clemson, Georgia Tech and North Carolina were very cooperative in switching time slots for these two games. We are extremely appreciative of the efforts by these four schools to quickly resolve this issue.”

Tickets for the Tech-Clemson game are available at www.ramblinwreck.com. Fewer than 2,000 tickets remain.