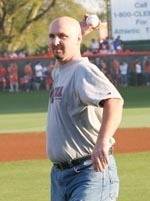 As part of the University’s continuing Sportsmanship Initiative, throwing out the ceremonial first pitch for Wednesday’s baseball game against South Carolina was a person who 13 years ago caught the Grand Slam ball hit by former Tiger Jeff Morris that enabled Clemson to defeated N.C. State and win the ACC Championship in Greenville.

Last weekend, Brent Lyda from Woodruff, returned that baseball to Jeff while Jeff was on a return trip to Clemson from his home in Seattle, Washington.. Jeff was unable make it to Clemson on Wednesday. However, to show Clemson’s appreciation to Brent, who is a South Carolina fan, for returning that game winning ball, Brent threw out a ceremonial first pitch along with Clemson soccer coach Trevor Adair.

Jack Leggett is flanked by Clemson soccer coach Trevor Adair and USC fam Brent Lyda, who each threw out ceremonial first pitches before the Clemson-South Carolina baseball game on April 12.